Folk plays are a fascinating pieces of traditional custom and one which is surviving well in the 21st century. One particular strand of this tradition is the Cheshire Souling or Soulcakers. Presently, there are a number of groups which enact this strange ritual usually from 1st November (All Souls Eve) until the 4th November in pubs, inns, houses and sometimes churches in the Cheshire and Lancashire region. Although the Antrobus Soulers may disagree, all of the groups are revivals (this means there has been a break in the last 100 years). The second oldest revival group is that which tour with the Warburton Play.

I decided to track them down in the picturesque town of Knutsford, I had read of their website, a very informative site where I found some of the information for the blog, which gave the name of the first pub in the town. I turned up and enquired behind the bar “Are the Soulcakers arriving tonight”. The “What?” said the manager; she appeared to be blissfully unaware. They planned to do a quiz at 8 when the group arrived. However, her younger colleague did seem to know what I was on about, so 50% was good enough for me! I sat down with my drink and some free sandwiches. Later a couple arrived and the manager pointed over to me, at least this was some support for the fact I had arrived at the correct destination.

What is a Souling Play?

Souling in the strictest form is a custom associated with the souls of the dead’s journey through Purgatory. This would involve the collection of money or the giving of cakes, soul cakes, hence the name soulcakers. To eat such soulcakes would then involve the eating of the sins of those unable to get to heaven. Of course you may ask “but that means the consumer gets the sins!” Yes, but by continuing the tradition ad infinitum there would always be someone eating sins for those just departed. Of course as the custom faded to be replaced largely by Hallowe’en’s trick or treaters, those who were the last to buy the soulcakers must have never left purgatory so heavy the burden of the sins they inherited!! You may of course look scornfully at the custom but this is the origin of the funeral wake.

What’s this got to do with a play?

Good point. It appears at some point to warrant the giving of money or cakes, some bright spark either the receiver or giver thought they wanted something a bit more substantial and so the play was probably born. This may account for the similarity to the Christmas Mummer’s Play, because it’s easier to convert something to write from scratch. Indeed, to the uninitiated there does not appear to be much difference between the Soulers and the Plough Monday play. Indeed, both share a similar plot, both being about death and revival, and share in some cases the same characters: the quack doctor, Beelzebub, and the familiar drag-act, so to speak. However, there are differences, the Sergeant is replaced by King George, the Tom Fool replaced by the Turk and there’s a decent bit of sword play in it…and there’s the Horse.

The horse is a unique feature of the Soulers and one which has created the most interest amongst folklorists. In the present guise, the horse is an old hunt horse befitting its trainer in hunting pink and treated with upmost almost quasi-religious respect, it being hidden from view when not in the play almost as if this might detract from its powers. 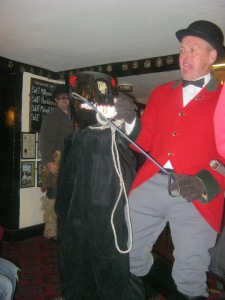 Perhaps the horse survives in Cheshire plays because of the proximity of the Welsh boarders with their Mari Lwyd horse tradition existed (or vice versa), although of course there are the Poor Old Oss traditions and to some extent Derby Tup traditions surrounding it to the east. Many folklorists have commented that the Horse was an important figure in Celtic paganism, which is significant being that All Souls Day replaced the ancient Samhain. Certainly the horse is no Hobby Horse, but a dark rather sinister creature, a skull on a stick with a black cape beneath hiding is manipulator. In response to key phrases, its mouth opens and closes with a menacing clap! It is interesting to note that there is record in the 1930s that the Warburton horse was buried in the grounds of the pub at the end of the performance. This is referenced once it appears and perhaps this was a ceremonial aspect, rather than an end point, emphasizing the death and resurrection aspect again.

Around 8, these plays never seen to be on time, we heard the rowdy chorus of the soulers and soon after in bursts Big Head, much to the amazed and giggled bewilderment of the table nearest the door. The plot was as follows…in comes the Turk who does a bit of boasting, to be challenged by King George, there a fight, Turk dies, in comes his mum (that old standard a bit of drag), calls for the doctor who revives in, in comes Beelzebub who steals a drink from those bewildered beer drinkers and the Horse with its rider.

There may have been many different local variants of the play perhaps every village had one, but as the 19th century came to close the numbers began to dwindle, the final nail in the coffin being the First and Second World Wars. Indeed the Warburton play was last performed in 1936. However, after only a gap of 42 years, it was revived, thanks to being written down before its demise. The revived play centres around the Saracens Head in Warburton where the play is performed for the first time that year and then after 4 days ends there.

A group called the Bollin Morris revived the play in 1978 and continued to be the preserve of this group until the 1990s, when the group became a mixture of Morris and non-Morris, and then finally in the 2000s the group began unconnected with Bollin Morris. The establishment of set characters for each member of the group appears to have introduced a degree of professionalism and the play was delivered word perfect and with great vigour and enthusiasm despite in some cases the paucity of punters. I was impressed by the fact they took notes and appeared to be organised to get the best performance each time like a real play and this was not some amateur effort.

So if you find yourself next year around Cheshire, I suggest following the Warburton play, it will be enjoyable evening. 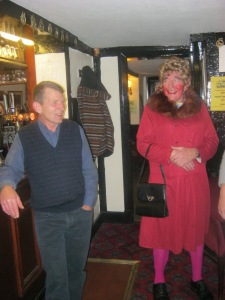 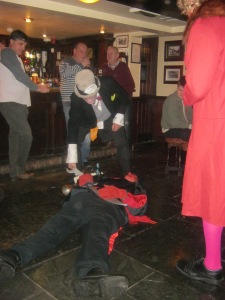