Last year I discussed the lesser known but nevertheless picturesque Matlock illuminations, this month it’s time to talk about the grandfather of illuminations: Blackpool. In 2012, the town celebrated 100 years of lighting up and so I felt it was fitting to return back.

Blackpool is the queen of all seaside resorts, a well established resort long before the illuminations begun. In 1879, the local council decided to invest £5000 into converting the gas lights to Dr Siemen’s 8 dynamo-electric street lighting, the first electric street lights in the world. This new scheme attracted near on 100,000 visitors to see the promenade lit up with 48,000 candles worth of ‘artificial sunlight’!

Like Matlock, royalty was again the influence and the regular lighting up was established after the first Royal visit, by Princess Louise, to the town and the renamed Princess Parade in May 1912 with its ‘novel fashion of garland lamps’.

So impressive were the 10,000 bulb display that it was they were set up again in September and large crowds assembled. So successful was the scheme that local businesses persuaded the council to repeat it in 1913 and despite the inevitable stoppage for the First World War, their revival soon cemented their fame and became an established tourist attraction and in 1932 animated tableaux was added. By the outbreak of the Second World War, the area covered by lights extended six miles from Squires Gate to Red Bank Road. Indeed, although a preview was made on the 31st August which ironically included a searchlight on top of the Tower, the blackout soon enveloped the town and it was not until 1949 that the brightness returned.

The switch on has been a big thing, from the big attraction of Lord Derby in 1934 to more recently Gary Barlow, a lesser attraction. In 1949, actress Anna Neagle pressed the switch, and this established the pattern from then on. Celebrities have become associated with this switch on are a barometer for then current fads and celebrity custom. From great Lancastrians such as George Formby, Gracie Fields and Ken Dodd to oddballs such as the Canberra Bomber and Red Rum, the horse!! Who could forget Rear Admiral Sandy Woodward in 1982 sandwiched between the Muppets and Cannon and Ball? One of the most memorable, being the 1975 Doctor Who switch one advertising the town’s long running Who exhibit. In the 00s we may remember The Stig from Top Gear, Keith Lemon and Steps, but come a hundred years on, they’ll be as well known as Jacob Malick and John H. Whitney! Who…? Look them up. Indeed the switch up has become an event in itself, yet with tickets at £34 and massive losses running into the £100,000s (is there a connection?) this may be in danger.

Despite the rain and the wind, which can make a visit at this time of year so bracing, somehow the bright lights raise the spirits. Walking from the guest house towards the Tower I awaited the allotted time when the lights were switched on. There was no countdown and I almost missed it only realising it was happening when I could hear the cries of the assembled people as we watched the lights go up, down and up, flash and a large heart light up.

Of course the other great illumination features is the one which could inflict injury: the trams, although these are surely during the illuminations safest they could be, being lit up like fireworks and resembling something Santa would dream up to transport himself. Catching them is another matter, for everything I managed to get to their depo, I’d just missed one!

Then 66 nights latter, it’s all switched off, taken down and put into storage for another year as this jewel of seaside towns beds down for the winter.  The crowds disappear, ready to return next year for these bright garish lights are still a great attraction even over a 100 years later and long may they blaze on.

That makes sense and such is the origins of Stannington’s Harvest sing, an annual non-Christmas carol singing session in the Rivelin Inn. A delightful single room pub set on the outskirts of  Sheffield but seeming spiritually many miles from there, surrounded by rolling hills, woods and open fields. 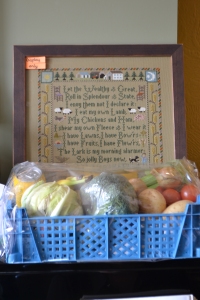 Reap what you sow

In a Thesis written on the custom  by Trish Bater one of the singers,  Geoff Lester speaking on the19th of June 2007 stated:

“It originated in the singing at Dungworth, of the Christmas Carols, of the enthusiasm, particularly at the end of a sequence of singing days…when it was time to pack up, somebody said, or it was said, or it was often said ‘why don’t we actually sing at other times of the year?’ and it occurred to me the only other times of the year would be Easter and harvest. I particularly…like ye harvest hymns and therefore I thought well, instead of talking about it, let’s do something about it, and that was why I organised the first one.”

In an article in the Sheffield Chronicle Gathering in the Valley for the great harvest Singalong, its founder Geoff Lester relates:

“The Rivelin pub near Stannington was in an ideal location, accessible to many of the other carolling communities and in the middle of a farming area where the fruits of the harvest season were visible right outside the door.”

Indeed some of those fruits (and vegetables), albeit a brief selection, could be seen above the piano awaiting distribution by raffle. However, it was the songs that the assembled masses have come to experience – I say experience because it is impossible to attend this event without getting involved, regardless of talent although most were pretty tuneful. The sun was shining when I arrived a few minutes before the midday sing off and the pub was busy but not as crowded as those Christmas sessions, but just as atmospheric.

Top of the crops

This year, Geoff Lester explained in the Thesis:

“Harvest is interpreted very liberally…when you come to look for harvest hymns which are good to singing that sort of situation there aren’t many and so consequently I threw in a lot of my favourite hymns like And can it be.”

A quick scan of the hymn sheet reveals a fine selection of Harvest related songs were assembled. Twenty-seven hymns on the song sheet – two sung infrequently and one is not sung at all.These were an unusual mixture of eighteenth and nineteenth century hymns such as Come ye Thankful people, folk songs such as ‘To be a farmer’s boy’, parlour ballads and comical songs. Basically everything but Christmas carols! Not only that but uplifting. Soon on arrival I found myself squeezed into the space near the piano, reading the Thesis, and then after a few introductory bars, the place erupted in soul enriching song! 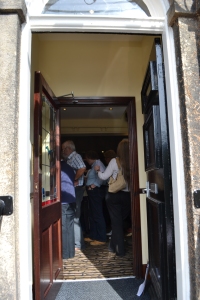 Last year the Harvest Sing was put in peril by the closure of the pub, but the pub reopened and the custom’s survival was secured.  However, whereas perhaps a custom largely organised by one individual that it might be in danger due to that but I am more than confident the mass of people regularly attending will ensure it will survive for many years since. Sadly, I could not stay for all the whole session and nearby Meadowhall beckoned.

The Harvest song, a contrived event perhaps but one which is more than justified and a worthy successor to the Harvest Home of the past. It certainly made walking around the soulless streets of Meadowhall more uplifting!

St Luke’s Day, the 18th October passing by unheralded in the main – but if you were a dog and in Yorkshire or Manchester you may have been quaking with fear with your tail between your legs. Why? For this was dog whip day. Sometimes it is good these are demised customs.

Whipping up a frenzy

Dog whippers as the name suggested were employed to remove dogs from the church during a service or else keep them in control – some have suggested the whip may have also kept the congregation awake! Certainly this was the job of  the dogwhipper at Claverley, Shropshire where:

“one Richard Dovey, in the year 1659, left certain property near the church on condition that eight shillings per year be paid out of the rent to a poor  man to awaken sleepers in the church and to drive out dogs.”

Indeed, a quick glance of churchwardens account indicates that the job of dog whipper was a fairly common one, if the distribution of relics is any evidence. For there is Dog whipper’s marsh in Chislet and a ‘Dog Acre’ in Birchington, both Kent, Dog Whipper’s Pew at Wrenbury, Cheshire and even a Dog Whipper’s Flat at Exeter. Devon. Indeed, the title albeit defunct, may still exist at Southwell, Nottinghamshire. However, none of these appear to be associated with a calendar date.

A dog with two tales

Certainly, the use of the dog whipper to keep sluggards awake, as at Castleton 1722 might have been justified with this account by William Walsh’s 1897 Curiosities of Popular customs:

“Tradition explains that once in Catholic days a priest accidentally dropped the Eucharist while celebrating mass on this festival. It was snapped up and eaten by a dog. The dog was promptly killed, and all its brethren were doomed to a periodical flagellation in memory of the sacrilege.”

He also notes that:

“The same custom also existed at Manchester on the first day of Acres Fair, which was held about the same time.”

However, in Hull another story is told, in Notes and Queries 1st S. vol. viii. ID. 409,  and the date slips back to the 11th, although of course this would still be St. Luke’s Day Old Style perhaps?

“Previous to the suppression of monasteries in Hull, it was the custom for the monks to provide liberally for the poor and the wayfarer who came to the fair held annually on the 11th of October; and while busy in this necessary preparation the day before the fair, a dog strolled into the larder, snatched up a joint of meat and decamped with it. The cooks gave the alarm, and when the dog got into the streets he was pursued by the expectants of the charity of the monks, who were waiting outside the gate, and made to give up the stolen joint.”

Or as Walsh puts it:

“he was intercepted by a crowd of suppliants at the gate, who beat him soundly and rescued the meat.”

It is added that:

“Whenever, after this, a dog showed his face while this annual preparation was going on, he was instantly beaten off. Eventually, this was taken up by the boys and, until the introduction of, the new police, was rigidly put in practice by them every 10th of October.”

Every dog has his day

Are these stories true? I doubt it, I believe they were probably concocted to justify the need to pay for the dog whipper and may have coincided with their annual pay day. Doubtless, the custom died out in the late 1800s when fortunately, a more animal welfare minded society developed and no observance of it survives today – unless Whip-ma-whop-ma gate in York does indeed celebrate it. It should be noted that 18th of October was also regarded as a day called Little Luke’s Summer and indeed as I compose this piece it is rather sunny outside