The Richard festival illustrates how an ancient feast day can be used to create a local event which celebrates the town’s claim to fame – it’sbrine pits in a manner which incorporates all the classic aspects of a May festival: Morris Men, maypole dancing, historical reenactment and err… classic cars.

Take with a pinch of salt 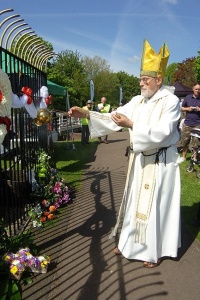 The town had some history of celebrating these brine pits. John Leland in his Itinerary, written around 1540 gives the legend:

“Some say that this salt springe dyd fayle in the tyme of Richard de la Wiche Byschope of Chichester and that after by his intercession it was restored to the profit of the old course. Such is the superstition of the people. In token whereof, or for the honour that the Wiche-men and saulters bare unto this Richard their cuntre-man, they used of late tymes on his daye to hang about this sault spring or well once a yeere with tapestry, and to have drinking games and revels at it.”

“on the day of St Richard the Patron of ye Well (i.e.) saltwell, they keep Holyday, dresse the well with green Boughes and flowers. One yeare sc. Ao 164-, in the Presbyterian times it was discontinued in the Civil-warres; and after that the spring shranke up or dried up for some time. So afterwards they kept their annuall custome (notwithstanding the power of ye Parliament and soldiers), and the salt-water returned again and still continues.”

This appears to have been an early record of well dressing in the country, albeit not as elaborate as those of Derbyshire today and simply arches over the well to give thanks. When this custom fell into abeyance is unclear, but it was probably around the Reformation, although according some sources his statue, erected 1935, was dressed on the 3rd April until the 1990s but details are difficult to find. 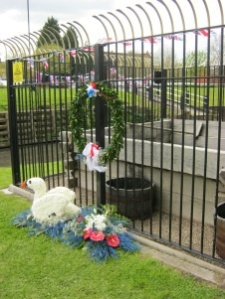 What exists today is a celebration with a modern twist, not exactly a revival, but an concoction of what these events should have. it combines elements of the traditional custom with modern twists. Arriving in the town one comes face to face with Morris Men whacking sticks close to vintage Morris Minors. The cars are indeed such a big attraction they’ve taken over the billing and the event us renamed St Richard’s Boat and Car Festival, and these cars rather surreally spreads through the quaint streets of the town. 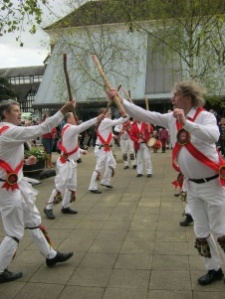 However the wells are not forgotten. The replica Upwich pit and a brine pump in town are imaginatively dressed in honour of the saint with a model of a swan made of flowers and other flower dressing. In the last few years a local Probus 87 group, a local business group, have reenacted the blessing. Now a group dressed as friars wind their way from the church carrying a banner with the saint and a floral cross. At the well a ‘bishop of Chichester’ blesses the pit. After such a traditional aspects it’s back to the puppets, boats, classic cars…all in all a splendid advert for the town.