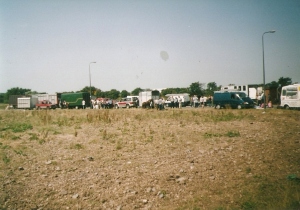 It was on the 5th of August, the weather fair and fine,
Unto Brigg Fair I did repair; for love I was inclined.

So famous a fair which became immortalised in the well-known folk song. However visiting on the day in the early 2000s I found a different story. The town sign clearly pronounced – Brigg – Town of the Horse Fair – but where was it? So famous a fair I thought would be much trumpeted with posters and banners. So I asked in the  Tourist Information Centre, they said they knew nothing? How strange I thought…then a local man learnt over to me and said in a quiet voice “It’s still on…they want to get rid of it and so are keeping quiet about it….it’s on the industrial estate on the edge of town.” Industrial estate I thought?

It was a sad statement for an event which was the oldest of its kind in the country. Legendarily founded in 1204 in the Reign of King John it was an important charter fair which ran for five days. It may have originally been a general fair becoming a horse fair only later in its history. The sight of large numbers of horses and their assembled traveller community was a memorable site.

The Fair has in recent years apparently had a tenuous hold on survival. Maureen Sutton notes that it was in rapid decline in the early 1990s. She notes that in 1995 a new committee took it over the organisation and the fair was revivatilised and in 1997 80 horses were present. Morris dancers and local folk singers attended as well….these sadly were nowhere to be seen in the early 2000s.

Of course in the world of NIMBYism an event which attracts large numbers of traveller folk was always in modern times to be not looked upon favourably and one wonders whether this was behind the councils attend to sequester it. Certainly if Maureen Sutton (1996) account is anything to go by in her Lincolnshire Calendar, the attendees were not shy of sharp practices.  An 89 year old man recalls:

“Oh aye, Brigg Fair, I seed it with me own eyes, I seed it. I was a boy of ten and me dad took me. Me dad bought twenty horses and one of them was lame, it it had sort of – like this, gristle in the leg. When they run with others up and down they kept this one to the wall side on the street, when they run them back again they made sure it was hid in the others, tricksters – they were that. I seed it bit I was too daft to tell me dad, lame it were – no good.”

Such activity was sure to make in unpopular. Indeed the reluctance to ‘allow’ the proper fair resulted In 2003 with two fairs occurring one unofficial one with horses the official one didn’t! Then the original fair site disappeared under a Tesco supermarket and an alternative could not be found and so the fair did not occur. Even barriers were placed across Station Street to prevent the traditional trotting of ponies, due to the danger to the general public…All this appeared to send the message that the fair or rather its traditional attendees were not welcome!

Horsing around
Certainly there was a depressing and subdued atmosphere at the industrial estate – a very perfunctory place for a fair. Yet it was like stepping into another age. The roads were lined with caravans, stalls selling china and jewellery mainly and of course horse boxes with their horses and ponies sheltered in their shade. Nearby men had hushed conservations, every now punctuated with hand slapping and an occasional laugh. Up and down the lanes people milled around examining the materials on the stalls or else being curious. Every now and then a trap would come by with a pony trotting along. There was a feeling of being an intruder into another world – this was long before the media’s obsession with Gypsies – and certainly I experienced a number of furtive and concerned looks from the attendees – why was I taking photos they may have thought.
As I took these photos of the dying world I thought that this would be one of the last…but somethings customs can have greater resilience than that. Perhaps thanks to a combination a better organisation, that increased desire to preserve old customs and the media appeal of the travellers and their customs the Brigg Fair is bigger and better than ever.  Now the event starts with a parade of horses for the entertainment of the crowds…which sounds like a long way away from the trotting ban of early in the 20th century.