It is a small community. Blink and you’d miss it on the way to Penistone. It does appear to be able to agree on its name Midhope cum Langsett or Midhopestones? There’s an even smaller church, really a chapel and even smaller congregation. But what it lacks in size it certainly makes up with atmosphere and devotion – no other church in the region blesses its wells without a dressing. Which on reflection is odd and rather lacking in commercial spirit – well dressings bring visitors and revenue. However it is refreshing to see that this is perhaps that this is a community more interested in the tradition than the tourist.

The history of the custom is an obscure one. There is record of this being a revival. When it was revived local people who recall it being done in their lifetime and local belief is that the blessing of the well was done in the 1800s. Perhaps like the Bisley well blessings it was the brainchild of a local High Church clergyman who wanted to return a bit of colour back into these mundane mining landscapes. Sadly despite the conviction of this being an old tradition nothing is written down to support the view. Sadly, the only history of the area Joseph Kenworthy’s (1935) The Lure of Midhope-cum-Langsett fails to mention it although it does discuss St. James Well. Mind you it is worth noting he does not refer to the Potters well so it might not have been that comprehensive. Indeed he does state that the customs of the village have not been recorded. Was he hinting something? The genuine belief of its age suggests to me that this was a revived custom otherwise well dressing would have been done instead or as well when it returned. As it was across this part of South Yorkshire at Dore, Norton – itself in 1972 and close by in Penistone. Tony Foxworthy Folklore of Yorkshire (2008) states that the two well are dressed in June. However, I cannot find any corroboration of this in the usual sources such as Nayor and Porter’s Well dressing book! This suggests an older origin to me. 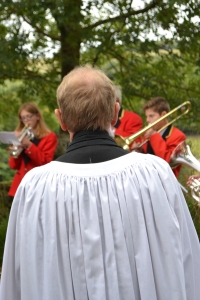 Rob Wilson (1990) in his Holy Wells and spas of South Yorkshire notes that the custom was revived on the 1st October 1972 but appears now to be fixed firmly on the third Sunday of September. Why this date was chosen is unclear as it is not a patronal day or a date associated with well customs. He also notes that both wells are “decorated rather than dressed’ however this aspect of the custom does appear to have fallen into abeyance. The chapel now appears to be dressed in bouquets and wreaths and makes an evocative site.

Such customs can easily disappear from a parish as quickly as they begin, often being the initiative of an enthusiastic curate, who dies or moves on and the new incumbent either fails to keep it up or in some cases in openly in opposition to the custom. This is certainly true of the Church of England. And certainly true of customs associated with wells…the celebration of which is not to everyone’s taste. Fortunately, the revival was due to an Anglo-Catholic incumbent and the ministry here has remained High Church ever since….it’s probably unlikely to change and so the custom remains safe.

I arrived in the small village just as the service had started in the delightful old chapel of St. James. The lane up to it was packed with cars such that passing along it was difficult. Indeed at one point a combine harvester wanted to pass and came millimetres from the wing mirror of a parked car – I should think they are used to that around there.

I came into the chapel just as the Canon was discussing holy wells and was remarking about Harrogate and Buxton and what was known of their holy well, St. James. After around 40 minutes of the service the congregation assembled outside with the Loxley Silver band.

On this autumn afternoon, the weakness of the sun can be felt, leaves are beginning to fall….the bright red colour and sounds of the Locksley Brass Band give a vibrant jab in the arm on a grey afternoon. The hymn O Praise Ye the Lord is sung heartily at the entrance to the lane where the well is located. The band remained at the road way as the congregation lead by the clergy walked down the well. The well is located below this lane and is accessed by a gate and steps…down into a very muddy field…not surprisingly many of the attendees watched the ceremony from lane above. The well itself is surrounded by metal railings. One of the clergy stated we can get inside and opened a gate and one by one they entered. It is not a large enclosure and I wondered if they were attempting some sort of world record ‘how many clergy can we get in an enclosed space.’ Once there the following was recited:

A porcelain cup was produced and at this point the Venerable Steve Wilcockson bent down and parting the green slime on the surface filled it with remarkably clean water. Fortunately he did not partake in it but upon saying the blessing poured the water to libate the well and effectively make it holy again! The blessing went:

“We give thanks to the Virgin Mary, Jesus St Paul, St Peter, John the Baptist and particular St James under who’s patron this well brings forth water and brings it to this water to the parish….In the faith of Jesus Christ we dedicate this well to the glory of god, in the honour of St James, in the name of the father, the son and the holy ghost. Heavenly father, we thank you for the gift of water to refresh the earth and make things grow Bless hallow and sanctify this well.”

The group then traipse down the hill to the other well – the Potter’s Well – a decidedly more secular affair. Here the water was drawn by the canon and then poured to the ground again. Here not only was the well blessed but so was the Parish. The band was put to fine use with the playing of the Hymn Glorious things of these are spoke and then the National Anthem was sung and everyone retired to a light tea at that other great British institution – the pub!

A brief custom but a delightful one. Just as the celebration finished an out of breath man arrived ready with his camera…”have I missed it?” He had…but it’ll be on next year, the community clear recognise the importance of their waters. I cannot agree more when Wilson (1990) notes:

“An event such as decorating and blessing a well requires very little financial outlay, and whatever money is spent is amply compensated for by the enjoyment and community spirit which the event engenders. Bradfield Parish council must be congratulated for their vision and initiative. Other councils take note.”