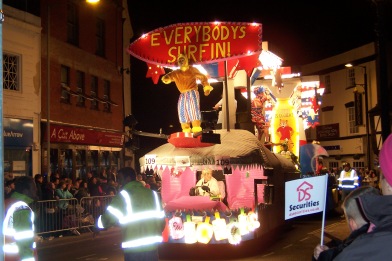 Nights draw in, there’s that smell of rotten leaves, the smell of autumn, a tinge of coldness – Bonfire night approaches. Whilst many towns prepare their communal bonfires and select their fireworks for their annual community celebrations – down in the west country they do it differently.

Bridgwater’s original celebration were much as elsewhere – the large bonfire stacked up with just about anything flammable, guys atop, except due to its association with the sea and river, a large wooden boat was used. Apparently, the over-enthusiastic desire to stack as many boats on the fire, whether seaworthy or not, stopped this custom as the town ran out of them and local fishermen got a bit angry no doubt!

Then Bonfire gangs started to develop processions which became more and more elaborate – with costumes, the participants becoming Masqueraders, a term unique to them and to get them going loud music. Then in 1913 a pivotal moment happened with made this west country carnival became unique.

In 1913 electric lights were introduced. And what a result! The current carnival is a riot of sound and light (quite literally) and its extremely impressive. Around 22,000 lightbulbs on average light the floats. These floats resemble portable fairground rides in their garish and intoxicating nature.

On such a cold windy evening, the energy produced by these floats is palpable. 22,000 lightbulbs produce a huge amount of heat. Good considering the parade lasts around two hours or so.

In 200xx the parade was remarkable 40 100ft long vehicles snaked around the 2 and half mile route, crowds heaving on the pavement to see the spectacle. 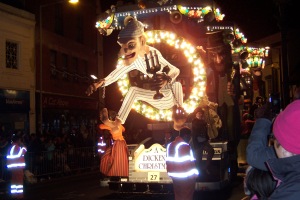 Bridgwater take their Bonfire celebrations seriously. Even when WWII came a small group known as the Kilties kept the tradition, fortunately post war it was back to bonfire business.

Fortunately, one thing that has survived, despite demands to remove it are the squibs, although they have changed as insurance pressures have prevented the big bangs which culminated at the end. The squibs are large fireworks held on a cosh, long wooden handle. A hundred squibbers stand in a line in the centre of the town sending out a shower of light.

The squibbers start assembling once the illuminated carnival finishes. There is an air of anticipation, even danger in the air. The mood appears to change from family fun to something a bit darker. Some members of the crowd disappear perhaps aware of this perhaps fearing its dangerous,…but nothing happens. Its well organised and safe! A line of petrol or something similar is ran along by the squibbers and this is lit to remarkable impact! Then as the shower of lights finish; it’s all over!

Now attracting over 150,000 people and responsible for a whole West country season of illuminated carnivals across the region, Bridgwater’s spectacle is not to be missed!