Kew is a delightful retreat in west London. Its splendid glasshouses, incrediable arrays of perrenials and peaceful vistas. That is unless you happen to be there when the Clog and Apron race is on. For a few minutes only one of the main paths in the gardens thunders to the sound of wooden clogs and cheering!

But why clogs and aprons? Well clogs were traditionally the footwear of all gardens long before crocs and wellies appeared.They were better than leather boots to keep one’s feet dry Aprons being used for holding garden tools. Each year first year horticultural students are given a pair of wooden soled leather clogs and an apron in a ceremonial way as symbols of their profession. Whilst the aprons may be worn by these students, the clogs are purely symbolic most preferring those rubber shoes.

Runners (but not beans or strawberry)

The exact origins of the race are unclear as records have only been kept since the 1950s but it is thought to have started in the 1920s. It was one of a whole range of running events such as one which was between rival RHS Wisley and all around the garden race – must be all that propogating demanding some serious leg stretching.

The clog and apron race was a way of the older students to welcome the newer ones without any form of reward but glory.; more recently the Student Union has provided medals for first, second and third place. 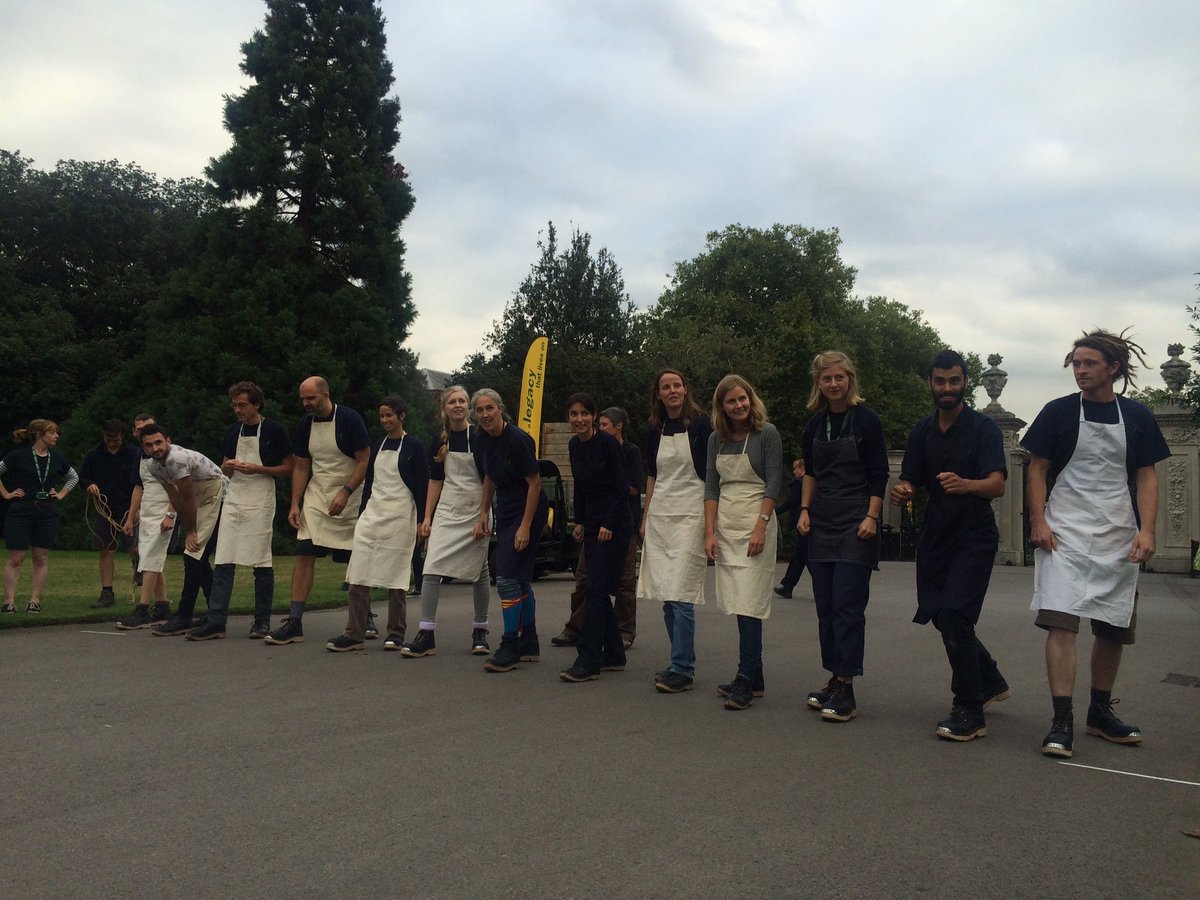 One of the earliest records in is the 1952 version of the Kew Journal where the extracts below are taken, which was the first after the interregnum that the second world war had enforced. The Clog and Apron Race was again held this year after a long interval, as the last race was run in 1939. Interesting it was held in the early summer:

“The race was held in fine weather on Friday, May 25th and the number of runners was so large that the field had to be divided into two heats. The first hear was run in the time of 59 seconds, being won by Mr P. Nutt ( -pixyledpublications honestly that was his name!) whilst the second heat, which like the first consisted of thirteen runners, was won by Mr. G Fuller. The first four from each heat lined up for the final and in this a very exciting race resulted. The ultimate winner, Mr Nutt, went into the lead very early, and despite all the efforts of the other runners, continued to gain until he ran hime an easy winner in a remarkable time of 49 seconds. Having regard to the fact that the course was from the Circle in the Broad Walk to No 3 Museum, measuring 375 yards and in view of the handicap of clogs and apron, the time is one which will be very difficult to beat in any future race.”

59 seconds seemed to be the model average. Nine runners in 1951 with a D. Hubbard gaining that time. It seems a few years later this Hubbard, becoming Dr Hubbard who in 1955:

“who started the race, gave a bottle of sherry and also cider to the winners. It was an exciting finish. J Eaton just beating A Keevil in 57 secs with D. Coleman third. J. Eaton also received the Pearce Cup, presented for the first year by Mr Pearce for the winner of the Race. Cynthia Warner also received a bottle of cider for being the only girl brave enough to challeng the lads. Mr Pearce provided cider to revive all the competitors. “

Then in 1976, the race then being held in October recorded that:

“The race started in failing light and finished up in almost total darkness. A record time was established by a second year student, Miss Sally Vernon, who became the first female to win the face but also claims the honour of breaking P. Nutt’s record time which was 49.0 seconds in 1951, by a clear 4 seconds. Sally with the speed of a 8.30 Trident, zoomed in at 45.9 seconds. “

However there were some recriminations

“Paul Potter, who came second in 55.0 seconds a clear 10 seconds behind speedy Sall, says that the girls should have been given only two little bins start, instead of the four they were allowed this year. I think that Paul knows that Sally would have still burnt him out if she had not been given any start at all. “ 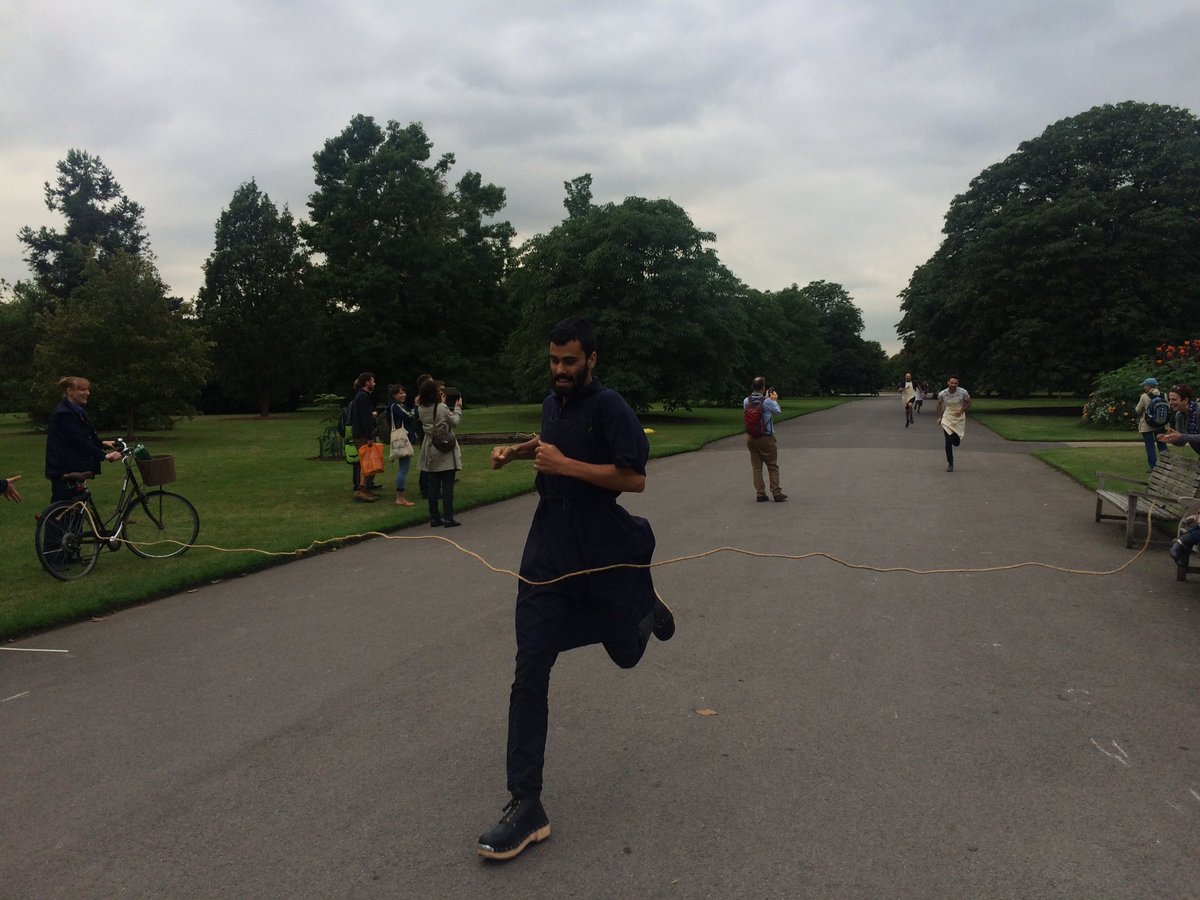 In 1979 the race for the first time was organised so that members of the public could experience it. The Press release read:

“The event recaptures some of the ancient apprenticeship traditions and colour of the former days. The Race competitors, all dressed in horticultural aprons and heavy clogs, pound the full length of Broadwalk a wide 375 yard long avenue (running from the Palm House Pond and Orangery)….Lady students are given a 50 yard start.”

Alan Titchmarsh in his Knave of Spades notes the event, failing to mention this was perhaps his sole sporting success:

“The clogs were used competitively each autumn in the Clog and Apron Race, which took place o the Broad Walk that runs from Kew’s Orangery to Palm House Pond, a distance of perhaps a hundred and fifty yards. Clad in this traditional apparel (both still worn by Kew students in the late 1960s) those who were rash enough to enter would clatter their way down he wide Tarmac path, sparks flying from their footwear and their denim aprons billowing like kites. The prize was a crate of beer, which was shared round anyway, so it mattered not who won or lost, but how they clattered down.”

It was a very fine evening with the warmth of the fading sun on my face, I awaited on the grass verge the runners. Running in clogs must be a strange experience. The weight of the wooden shoes suggesting the need for some strength in those gardening muscles. I don’t think it would be an event you would want to do every day. Fortunately it was quick for them for in less than a minute the first runner appeared. One could hear them approaching before seeing him or rather them as there was he was closely followed behind by the rest. The winner made a respectable timing and looks very happy to hold aloft the prize. Then it was back to the hard work of horticulture.