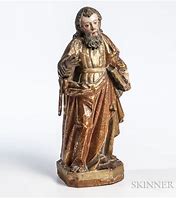 Until the first half of the 19th century, Nun Monkton villagers annually performed a unique ceremony connected to St Peter, the village’s patron saint. This being associated as T.F. Dwyer Thistleton 1875  British Popular customs present and past records:

“The feast day of Nun-Monkton is kept on St. Peter’s Day, and is followed by the “Little Feast Day,” and a merry time extending over a week.”

“On the Saturday evening preceding the 29th a company of the villagers, headed by all the fiddlers and players on other instruments that could be mustered at one time went in procession across the great common to “May-pole Hill,” where there is an old sycamore (the pole being near it).”

““rising Peter,” who had been buried under the tree. This effigy of St. Peter, a rude one of wood, carved—no one professed to know when—and in these later times clothed in a ridiculous fashion, was removed in its box-coffin to the neighbourhood of the public-house, there to be exposed to view, and, with as little delay as possible, conveyed to some out-building.”

Here it was apparently:

“stowed away and thought no more about till the first Saturday after the feast day (or the second if the 29th had occurred at the back end of a week), when it was taken back in procession again, and re-interred with all honour which concluding ceremony was called “Buryin’ Peter.””

“In this way did St. Peter preside over his own feast. On the evening of the first day of the feast, two young men went round the village with large baskets for the purpose of collecting tarts, cheese-cakes, and eggs for mulled ale—all being consumed after the two ceremonies above indicated.”

The author reports that:

“This last good custom is not done away with yet, suppers and, afterwards, dancing in a barn being the order while the feast lasts.”

When the custom died out is unknown but presumably it was in the 1800s. The culprit being a vicar who regarded it as a pagan survival. And whilst St Peter’s feast is celebrated still with the usual jollities including maypole dancing….St Peter is nowhere to be seen. Does he still lay buried near the sycamore…ready to be revived?