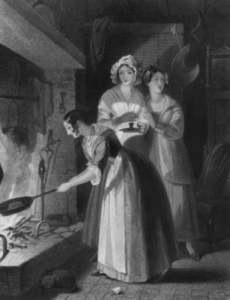 Midsummer was one of the days in the year where the lovelorn could discover details of their future lovers. There were many widespread customs. One under the cover of midsummer moonlit was to throw hemp or fern seeds over the shoulder and hopefully see your future husband saying:

“Hemp seeds I sow, Hempseed I mow, And the man who is my husband to be, let him follow me and mow.”

and the other to form the dumb cake. A midsummer method being in Charles Dicks (1911). ‘Weather and Folk Lore of Peterborough and District.‘

“Dumb Cake. On Midsummer Eve three girls are required to make a dumb cake. Two must make it, two bake it, two break it, and the third put a piece under each of their pillows. Strict silence must be preserved. The following are the directions given how to proceed: The two must go to the larder and jointly get the various ingredients. First they get a bowl, each holding it and wash and dry it together. Then each gets a spoonful of flour, a spoonful of water and a little salt. When making the cake they must stand on something they have never stood on before. They must mix it together and roll it. Then they draw a line across the middle of the cake and each girl cuts her initials each on opposite sides of the line. Then both put it into the oven and bake it. The two take it out of the oven, and break it across the line and the two pieces are given to the third girl who places a piece under each pillow and they will dream of their future. Not a word must be spoken and the two girls after giving the pieces to the third girl have to walk backwards to bed and get into bed backwards. One word or exclamation by either of the three girls will break the charm. Should a gale arise and the wind appear to be rustling in the room, during the baking or latter part of the preparation, if they look over their left shoulder they will see their future husbands. In some districts the pieces of cake are eaten in bed and not put under their pillows but nothing must be drank before breakfast next morning. Another variation is that two only make the cake and go through the same form as the preceding, only they divide it themselves, then each eats her portion and goes to bed backwards as in the first case and nothing must be drank or a word spoken. An uncooked dried salt fish eaten before going to bed in silence and walking backwards and getting into bed the same way, causes ones future husband to appear in a dream with a glass of water in his hand if a teetotaller, or a glass of beer if he is not one. Nothing must be drank before breakfast. An old woman said she had tried it over 40 years ago and her husband brought her a glass of beer and he was not an abstainer but rather the reverse.”

Often plants were used as noted in Devon:

“if a young woman, blind-folded, plucks a full-blown rose on Midsummer day, while the chimes are playing twelve, folds the rose up in a sheet of white paper and does not take out the rose until Christmas, it will be found fresh as when gathered. Then if she places the rose on her bosom, the young man to whom she is to be married will come and snatch it away.”

The custom was widespread being recorded in Wiltshire, to Herefordshire using Orpines Sedum telephium. John Aubrey records a custom in Wiltshire in his Gentilisme and Judaiseme. He notes that:

“the maids, especially the cook maids and dairy maids would stick up in some chinks of the joists etc,. Midsummer men, which are slips of orpines. They placed them by pairs, one for such a man, the other for such a maid his sweetheart, and accordingly as the orpine did incline to, or recline from ye other, that there would be love, or aversion, if either did wither, death.”

Nowadays the love lorn peer into the horoscopes…little has changed

“‘Whipping-Toms’ began at one o’clock. Two, three, or more men, armed with cart-whips, and with a handkerchief tied over one eye, were let loose upon the people to flog anyone within the precincts of the Newark, a bellman giving the signal for the attack. They were not by custom allowed to whip above the knee, and anyone kneeling down was spared.” 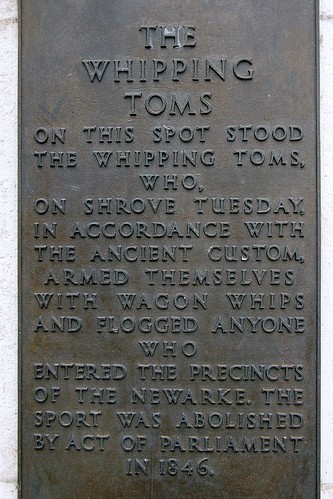 So writes Thoresby in his 1791 The History of Leicester. A topical post perhaps what’s in the cinema! In Leicester city centre is a rather strange plaque which records the bizarre Shrove Tuesday custom of Whipping Toms. Why would these men whip people? Another account explains why:

“This was known as the ‘Whipping Toms’.  It began with the primeval game of hockey, played between two crowds of men and boys armed with sticks having a knob or a hook at the end, and were played with a wooden ball, the ends of the Newarke forming the goals. At about 1 o’clock in the day appeared the ‘Whipping Toms’; three of them were in blue smocked frocks and carrying long wagon whips, with whom were three men carrying small bells. They proceeded to drive out of the Newarke the crowd of men and boys who had been playing the game of hockey.”

One of the theories purported for the origins of the custom is that it commemorated the expulsion of the Danes from Leicester in the 10th century. Although unlikely a connection with the Danish custom of Hocktide is perhaps more likely as the custom involved the extortion for money as well. – two pence which many gladly gave! However, the date is confusing!

The Whipping Toms also liked to line people up and whip up and down the line. Often people attempted to avoid the whipping by wrapping material around their legs. However, the whipping clearly got out of hand and the ‘victims’ would attempt to protect themselves with sticks and fight back. Unsurprisingly it often got a little out of hand as the author above notes:

“This proceeding, as may well be imagined, soon resulted in what would be described in more modern language as ‘a certain liveliness’, and the disorder became so great that about the year 1846, the corporation obtained parliamentary powers to bring it to an end.”

On the 16th February 1847 an Act of Parliament officially ended it and the last Whipping Toms put up a valiant fight – quite literally – but it was gone. Today the only record is the plaque on one of the corner pillars of the railings surrounding the De Montfort University’s Hawthorn Building.