“Dear Lord, I thank you for calling me to share with others your most precious gift of laughter. May I never forget that it is your gift, and my privilege.”

So reads the Clown’s Prayer read at Britain’s most colourful service. Here in a dull urban landscape, surrounded by grey buildings, closed down shops and forlorn flats…is a ray of bright cheerful sunshine. For at the church of Holy Trinity, Dalston, proclaiming as it does over its entrance, is the Clown church.

Here every year is without doubt the most colourful of modern memorials.  It remembers the so called founder of all modern clowns, the original ‘Joey’ Joseph Grimaldi a comic actor who developed the profession early 1800s. The custom begun in 1946 at St. James’s church on the Pentonville Road then moving to its current location of Holy Trinity in 1956 after its closure, although the grave is still there in the park established on the site. The service was once in January, then moved to March, but has been firmly on the first Sunday of February for many years. The reason for this timing was that this was an ideal time as clowns would be coming home from tours and seasons, circuses rarely ran at this time of year. Indeed the church was rammed…perhaps they could move it to a cathedral next time? 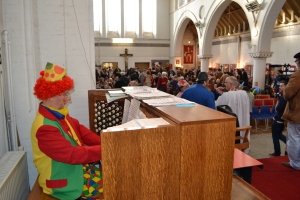 Someone who can tickle us and the ivories!

I knew I was in the right place when on arrival; I was confronted by colourfully dressed people standing idly in the street surrounded by photographers. I spoke with one of these performers, a tall gentleman dressed slapped up as a clown copper, called Eek.  With him was his wife also a clown. Indeed they appeared to be having possibly one of the world’s strangest domestic arguments! I asked the obvious question ‘Was she a clown first or did you convert her?’ He replied he couldn’t drive and I was so tempted to say ‘why did the doors keeping falling off your car!’ but didn’t. Making my way inside there was a similar array of clowns enjoying courting attention, posing in every way possible. Usually, I get the feeling that the participants of customs would rather photographers were not there. I didn’t get that feeling this time! They loved it. All sorts of clowns were there; from across the country and beyond the English shores, I spoke to one from Denmark. Being surrounded by so many colourful clowns, like preening parrots at one point I did feel the need to do some Attenborough style narration. This was especially so when some of the younger male clowns were clowning about with the female ones! 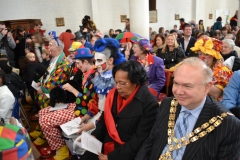 Spot the clown….your choice of joke!

Much has been said in many quarters about the psychology of clowns, but it was clear from chatting to those present that there was not one ‘type’ and many were normal (whatever that means). Sure some were a little over the top…but we don’t say that about our other performers…actors or musicians, I feel that some how as part of the entertainment business clowns get an unfair treatment

Getting a group of attention seeking performers (and I mean this in the nicest sense) to order was a bit difficult for the vicar, exacerbated by us photographers. Although in reality, it was the photographers who were causing the biggest problem underlined when the vicar sternly announced:

“We will not have the unseemly scrum of photographers like we had in previous years!”

Her face looking like almost the very antithesis of what the service was about…she lightened up later however. She was right of course, there appeared to be two events here: the Grimaldi ceremony and a congregation of photographers, film producers etc from around the world. This colour spectacle is a gift of course for the photographer as is the opportunity for puns…I would say the service is the most reported in the Newspapers than any others outside of Royal or Political circles. In truth the church was very tolerant and gave the photographers a few minutes before the service begun for photos.

‘All ‘allo who’s clowning about?

Armed with plastic flowers, a water gun, a bubbling making saxophone the clowns paraded in behind the usual apparel of church service. Usually the bizarre costumes are from the clergy, but here they looked decidedly normal. I thought at first with the service beginning rather traditionally with the Act of Confession, it would be a rather sombre affair, but soon some light heartedness begun. Bluebottle read the poem ‘Smile’ and was followed by Pip the Magic Clown who did a very comical piece with the visiting preacher which consisted of making a Bishop’s mitre, placing it on his head ‘filling’ it with milk and then using him as a pump! This clearly broke the ice and the vicar found the whole thing amusing. Then up was Mattie with a touching reading of Gene Kelly’s ‘Be a clown’. Mattie appeared to the elder statesman of the bunch. The rows of clowns accompanied him with the chorus… ‘be a clown’. The visiting priest berated the church for its lack of humour and told the story of a comical saint…finishing by placing a red nose on!

Clown remembered…the wreath at the shrine

Tears of a clown

“Lord accept our prayers for the soul of your servant Joseph Grimaldi. Receive him into the arms of your mercy, and grant him fullness of life, which you have promised to those who love you; through Jesus Christ Our Lord.”

Away from the jollity there was a clear poignant moment, when the clowns remembered their lost colleagues. As the vicar read out the list of lost clowns that year, the congregation both clown and ordinary, became hushed as one of the clown order processed with the wreath with some of the altar children carrying candles. The sadness in that slap was all so apparent. At the shrine of the great Grimaldi the wreath was ceremoniously placed and we all thought for a moment of all those laughs and laughter now lost to the world….

“God our Father, we remember before you the life of your servant known as Grimaldi the clown, his artistry, his skills and invention. We thank you for many lives blessed through his ministry. And, we thank you especially for all those, who, inspired by his ministry, have sought to bring laughter to others.”

I imagine that for some clowns, the profession is a very insular one, and the service gives them the opportunity to meet, catch up and compare notes.

What was clear was that from those present the profession is clearly an older person’s one – older clowns outranked younger ones I noticed – why was this? Is it that no-one wants to laugh anymore? Our clowns a bit old fashioned? Does everyone suffer from coulrophobia?  I did talk to one or two clowns, one not in slap, so I assumed they were, who’s sons was following him, but they were the oddity. Reading the literature Clowns International are aware of this and have workshops. Perhaps, also as most children’s access to clowns is via the often lack lustre ones at parties or else portrayed as rather evil in shows such as It! and Sarah Jane Adventures. Indeed, my eldest, who loves slapstick, refused to come on the later basis….a re-education is needed I feel, so I’m off to the Circus with them asap! 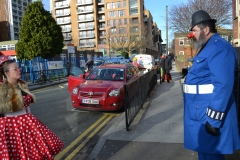 Find out when it’s on: