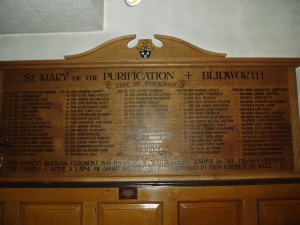 “Twas in a cradle, decked and graced, With flowers and antique ornament Mothers and their infant children placed.And up the hill to church they went,From Fishpool cots they duly came.From Blidworth and Fountain Dale;And the good folk did just the same who lived in Blidworth in the vale.Many such good rocking’s there have been, In the old church the good loved well,Which sanctifies the expanding scene within the sound of Blidworth bell”

The Church of St. Mary of the Purification is a rather uninspiring edifice from the outside, very modern, it was rebuilt in (the remains of the original church lie close by) but it is associated with a ceremony, unique in England. Go inside and on the back wall are two boards with names inscribed ‘cradle rockings’ with dates and a pulpit with a cradle carved on it. These may appear appear strange but this is a church proud of its revived tradition. For on the Sunday nearest the 2nd of February, Candlemass and the Feast of the Purification of Mary, a baby boy who must be born nearest to Christmas, as well as being born to married, Christian parents living in Blidworth (or now nearby), is “rocked” in a cradle. 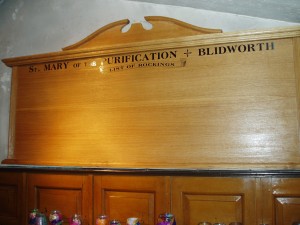 According to one of its earliest accounts in Notes and Queries of 1926, the ceremony dates from 1200. However, the earliest reference appears to be a rather unfortunate one.   It is recorded in Blidworth burial register:

At first hand before concerns set in, this was not a boy thrown by too much enthusiastic rocking. For the rest of the entry reads:

“two days before aged sixty years after a brawl”

For there are two traditions strictly speaking rolled into one here! The surviving cradle rocking and like many feast days, the actually partying part! For many years there was a feast day which coincided with this ceremony. People from Derbyshire and Yorkshire attended and it was often a time for family reunions.

It appears to have been a time of sports such as in 1758 according to Old Nottingham a man called Bullcalf brought a team of Derby wrestlers to compete with a Nottingham side. Nottingham won! To return back to Leake, he was killed in a duel. A captain Salmon of Salterford being on leave to go to the village feast encountered Tom Leake who was a Forest Ranger, and they soon argued in the Archer’s tavern over the Landlords daughter and Leake lost the ensuing sword fight….such incidents may have precipitated both the end of the feast and the ceremony. It appears to have been getting a little out of hand around the nineteenth century.  a report from the Daily Express of the 26th Feb of 1915 recorded police arrests of drunkenness on the day clearly indicating that ‘Rocking Sunday’ as it was called was still celebrated in public houses, although by then the actual rocking had fallen into abeyance.

Indeed we do not hear about the Rockings until it was revived in 1842 after a lapse of 150 years. It soon lapsed and, its final revival was in 1921, when Revd John Lowndes discovered an accord by the Revd Whitworth “there was a beautiful custom in Blidworth church called the Rocking ceremony” written in 1896. He thus thought it was a good idea to revive it and asking around found a Eliza Pointon of Fairlight Cottages who had an ancient cradle which she donated. The earliest report I could find is Notes and Queries 1926 states that the inclement weather had prevented the carrying of the cradle from the church. In this first report:

“The revd John Lowndes officiated and this rocking was the fifth that he has conducted, he having revived the custom, which had been started in 1200 and discontinued a century ago”

Although the report is possibly factually inaccurate this part. It does go on to state that the Bishop of Grantham was present and that the child was named Samuel. A report in 1936:

“In the picturesque village church at Blidworth, the usual annual crowd assembled at Candlemass to witness the medieval customs of ‘rocking the baby’as an act symbolical of the presentation of the Child Christ, in the Temple. The last baptised baby boy in the parish is taken by its parents to the church at Evensong and during the service, the baby is presented by the priest at the altar and dedicated to the service of God. The Vicar Rev. W.T.C. Swingler, placed the baby in a century old cradle, decorated with snowdrops, narcissi and foliage, within the altar rails, and rocked the cradle to and fro several times.”

“The baby was John Ramond Bennett, the only child of Mr and Mrs John Bennett, of White Lion..both natives of Blidworth…..Taking the baby to the altar which was decorated with snowdrops and white tulips, the vicar said ‘John Redmond I present you at this altar. Turning to the congregation he pronounced may he grow never to be ashamed to confess the cross of Christ… manly to fight under his banner to fight sin, the world and the devil and to continue as a faithful soldier and servant to his life’s end”         … 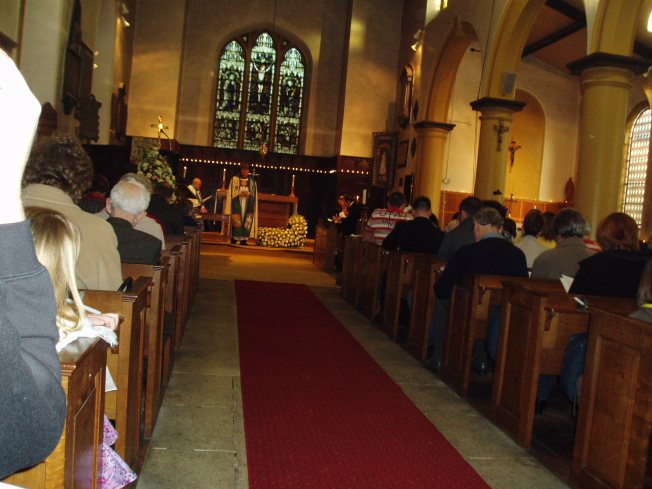 The vicar then rocked the baby in a cradle also decorated with snowdrops, immediately in front of the altar”

In the Bulwell dispatch from 1963 a report read:

“Dating back to the middle ages, the annual rocking ceremony took place at St. Mary’s Church Blidworth on Sunday night in the presence of a large congregation. The custom is for the last baptised baby in the parish to be rocked before the altar in an old wooden cradle symbolising the presentation of the boy Jesus at the Temple. Four week old David John Mason, whose parents have been the newsagent’s shop in Mansfield Road, Blidworth was selected for this year’s rocking ceremony. He slept peacefully throughout the service. The baby’s parents, Mr and Mrs. Stuart Mason, knelt beside the flower decked cradle with the provost of Southwell (the very Rev H. C. L. Heywood) during the ceremony. The service was conducted by the rev J. W. Busby (vicar of Blidworth) and the address was given by the provost who spoke of the importance of family life. Snowdrops and violets have decorated the cradle for the last seven years, but this year it was impossible to obtain these flowers, even at Covent Garden, owing to the severe winter. Instead white carnations and blue hyacinths were used.”

A report of 1967 Guardian Journal notes:

“There was a packed congregation – extra chairs were placed in the aisles-at Blidworth parish church yesterday for the annual Rocking Ceremony, a custom dating back to the Middle Ages. The latest Baptised boy in the parish, four week old Michael Anthony Griffith was blessed before the altar by the vicar, the Rev J. W. Busby, and then placed in a century old cradle and gently rocked. The Archdeacon of Newark the Ven Brian Woodham also took part. The baby the first child of Mr. and Mrs. James Griffith of 53 Preston road Rainworth was well behaved until the closing stages of the service when he burst out crying. A tape recording was made of the intercessions for the vicar who, after 11 years in Blidworth is leaving for a Lincolnshire benefice in March”

The Bishop of Southwell Denis Wakeling performed the rocking in 1980 and the child Edward William Tristram received a commemorative bible to mark the occasion inscribed by the Bishop.

It is interesting to note that the accounts given here and what I saw in 2009 are not wildly dissimilar. It is pleasing to note that the cradle is that found by Eliza Pointon and the order is much the same In 2009, the tradition was much as described above except the church had considerable difficulty finding a suitable boy, although girls were available, and a boy was finally found in Mansfield I believe but the cradle was duly rocked as described and the congregation held long candles to remember candlemas. 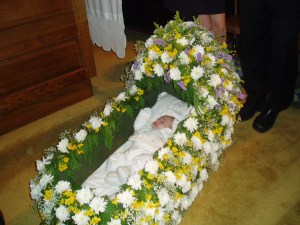 Rock a bye baby – the function of the rocking

The 2nd of February is Candlemas associated with the presentation of the baby Christ at the altar. In pre-Reformation England, mass at this time would have included the rocking of a cradle in the service as a visual aid for the largely illiterate congregation. It is possible that the baby rocking replaced the idea of Doves being sacrificed as in The gospel of Luke when Joseph and Mary went to the temple for Mary’s ritual purification and to perform the redemption of the first born, by giving a poor sacrifice of two doves.

Little appears to be recorded about this tradition countrywide but it is thought to have died out at the reformation. Blidworth’s church of the purification is the only church in England which undertakes this unique tradition on the Sunday nearest to the date.  However, some authorities linked the tradition with St Distaff’s day and ‘rocking’ appears to have taken to a wider context especially as it is reported that much celebrations occurred after the service with the baby processed around the town.

Whatever the origins if you are around in February in Nottinghamshire it is worth witnessing this truly unique custom.