What could be more quintessentially English; a large village green, the sound of leather on wicket, cries of Owzat and a sheep roasting! The latter is perhaps not the most English but this game of cricket is not all what it appears either!

Ebernoe is a small village, so small it is difficult to define as a village which each 25th July since 1864, a revival after a long lapse, the village come together to celebrate the Horn Fair. A correspondent to Folklore recorded its popularity in an 1950s edition:

“everyone goes, by car, bicycle, bus or push-chair, and on Shanks’ pony up the steep track through scrubby woodland to the hill-top common where the hamlet encircles the open ground.”

The origins of the Horn Fair are difficult to pin down, particularly as the only places it is recorded is in this village and Charlton near London. In the olden days the day was one of considerable ribaldry as it is believed to be derived from a custom of celebrating cuckoldry which would happen at the fair as it was probably a more riotous affair with dressing up. All this has gone but it is the roasting of the sheep whose head was traditionally presented that is significant. 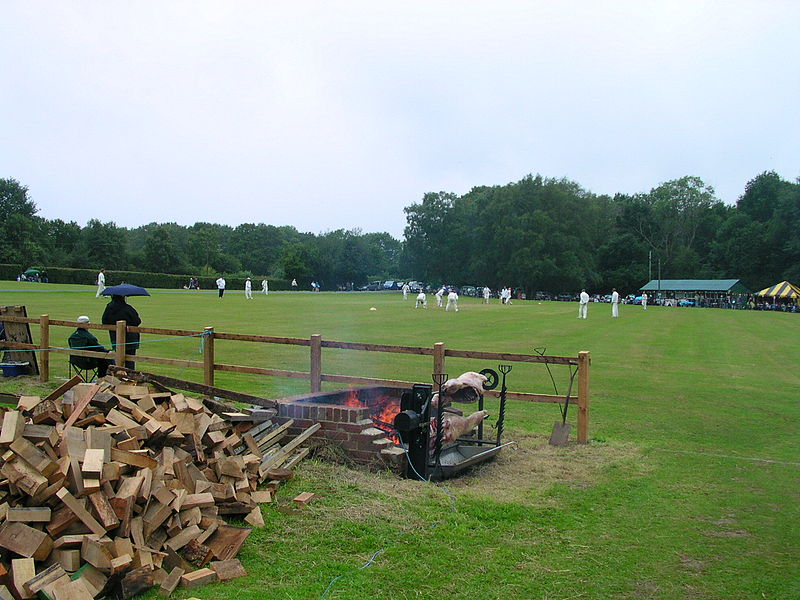 Indeed it is an odd association – cricket and a sheep roast – but one which is closely protected. There’s only been one interruption from 1940 until 1954 although this didn’t affect the cricket and a pair stag antlers were used as a suitable replacement so its not really a break – the cricket must go on!

There is a fair, a fun fair albeit a small one . It was described in Folklore as:

“with roundabouts and swings, hot-dogs and china dogs.”

The China dogs have gone but everything else survives!

Turning up on the day what first impresses you is the normality of the custom the cricket and the roast could be like any village fete where roasts have become common place, but there is something curiously ancient about this sanitised custom. The scene today is no different than that described by Stanley Godman in his 1957 article Horn Fair in Journal of the English Folk Dance and Song Society:

“It is a specially fattened sheep, roasted whole. A pit is dug in the ground, four and half feet long, and three feet deep. A big wood fire is lighted inside this trench and kept burning until approximately one and a half feet of cinders and hot ashes have accumulated. The carcass is rubbed with salt, red pepper and oil . . . A long pole is driven through the carcass and fixed in such a way that the sheep turns with the spit . . . the sheep is cooked for at least four hours and turned once every fifteen minutes. It is basted with oil at least once every half hour .”

At the end of the day all the attendees assemble by the club house. The horns are given to the highest scoring batsman although it is no longer the head of the sheep roasted on the spit rather a specially mounted one. The reasons for this maybe explained in an account by a Mr A.W. Smith, in Folklore he states that a:

“spectator’s dog…a year or two ago ran off with the head pursued by the butcher (in white coat and straw hat) brandishing his knife, and a string of shouting onlookers determined to avert a disaster.”

Although its more likely to be health and safety concerns! This notwithstanding organisation has not changed since it was reported in Folklore which recorded:

“The head is presented by a local notability with a suitable speech, of which the most memorable that I myself have heard was made by the parson of the parish, a man of striking presence. Holding in one hand the head – a horrid object prudently provided with a wire handle – he proclaimed ‘We men of Ebernoe know where the men of – [who had won rather too often] are going – and jerking his free thumb over his shoulder, we are giving them the Horns to help them get there !”

Ebernoe had won the year I turned up too and its best turned up to collect the head from the local lord residing at Petsworth I believe. Then sheets are handed around and the Horn Fair song is sung:

“As I was a-walking one fine summer morn,

So soft was the wind and the waves on the corn.

I met a pretty damsel upon a grey mare,

And she was a-riding upon a grey mare.

‘Now take me up behind you fair maid for to ride.’

Oh no and then, Oh no, for my mammy she would chide,

And then my dear old daddy would beat me full sore,

And never let me ride on his grey mare no more.”

‘If you would see Horn Fair you must walk on your way,

I will not let you ride on my grey mare today,

You’d rumple all my muslin and uncurl my hair,

And leave me all distrest to be seen at Horn Fair.

‘O fairest of damsels, how can you say No?

With you I do intend to Horn Fair for to go,

We’ll join the best of company when we do get there,

With horns on their heads, boys, the finest at the Fair.”

Stanley Godman in his article Horn Fair in 1957 for the Journal of the English Folk Dance and Song Society attempted to find out more of the song’s origins he noted:

“Thanks to the kindness of Miss Marie Slocombe it is now possible to specify the Country Magazine programme which led to the revival of the Horn Fair song at Ebernoe. It was broadcast on May 28th, 1950, and the song had been sung to Mr. Collinson two weeks before. As Mr. Collinson said, Jimmie Booker was a trug-basket maker. He had learnt the craft in East Sussex and carried it on until his death in 1951. In the broadcast the song was sung by Cyril Tucker. Mr. Morrish of Great Allfields Farm, Balls Cross, near Ebernoe, heard the broadcast and obtained permission for the song to be sung at the Horn Fair. In August, 1955, Mr. Morrish told me that when he first introduced it to the Ebernoe people in 1951, one of the company, Mr. Tom Stemp, then aged 75, said he could well remember it being sung by an old Ebernoe woodman, David Baker, who died in 1943 at the age of eighty. This was valuable confirmation of the song’s former association with Ebernoe, though, as will appear below, it cannot lay sole claim to it. Tom Stemp, who remembered the song, first played for the Ebernoe Horn Fair cricket team in 1900 and in 1954 his son was captain of the team. Such family traditions are still strong in this remote place, isolated geographically, with its school, church and cottages hidden behind a thicket, independent spiritually and (in normal times) to a great extent, materially. Another well-known Ebernoe family, the Holdens, have been associated with the Fair since 1876. Ephraim Holden, who died in 1954 at the age of 87, had attended every year since he was nine.”

It is clear that there is some underlying belief in the horns. It is indeed recorded that even if the day was beset with thunderstorms that was thought to be good for the crops and that it was the day to sow cabbages!

In the piece on Another English Head luck custom notes:

“A horned sheep was roasted whole in a pit of embers with the head projecting over the end, so that the horns are not damaged. It was ‘lucky’ to baste the sheep which, when cooked, was de capitated. The rival cricket teams, from Ebernoe and a neighbouring village, dined on the mutton, while spectators had mutton sandwiches. After the match the winning team got the head which they hung in their favoured pub. In a letter to me Miss Dean-Smith commented: It is not a horn fair as the term is generally understood …. It is not a patronal feast… the presentation of the horns suggests something more significant.”

Of course, it could all be some Victorian vicar’s embellishment but in a way there’s no better way to spend a warm July day and think of its origins!