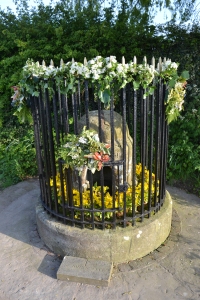 “In days of old in country ways, In Yorkshire woods, John sang they praise. Each year on the springtime wold, he saw the primroses unfold, the bleating lambs, the breaking sea. God gift to man eternally. Mist-laden nights, the shepherd’s crook, he left for cloister and for book, Through psalm and vigil, fast and prayer he grew in soul and found the three. But as he served n land of Kent. His winging thoughts still northernly.”

It is a quiet village. Bypassed by a major room which brings excited tourists from York to Bridlington. Harpham lies to the south perhaps sleeping, except on the Thursday nearest the 7th May when the village and nearby town Beverley celebrate the village’s famous son, Saint John of Beverley. Indeed apart from the fine pub named after the local landowners, it is the relics of the saint which draw people to the village – the fine church and down a lane his old holy well. Although the well is one of two ancient ones in the village, itself unusual, this one is dedicated to the saint. Indeed it is claimed that the saint who was born in the village is said to have struck the ground with his staff and this spring arose

Despite a claim that the visits to the well go back a 1000 years, the current custom dates back to the 2nd of May 1929, when the Minster at Beverley decided it was time to celebrate their own saint once encased in a fine shrine in that church, by visiting the place of his birth and paying homage to the spring. The date now moving to the Thursday nearest to the Saint’s feast day, the 7th of May. John born in Harpham in AD 640, would become an Anglo-Saxon Bishop of Hexham and York, being educated at St Hilda at Whitby and retiring back home at Beverley where he was buried and until the Reformation a fine shrine housed his relics. A number of posthumous miracles are associated with the saint in particular his ability to tame wild bulls brought into the church yard. As William of Malmesbury records in his Gesta Pontificum Anglorum:

“Savage bulls are brought up, tied fast, by strong men sweating profusely; but as soon as they enter the churchyard they lose all their ferocity and become, you might suppose, no more than innocent sheep. So they are untied and left to frolic in the yard, though previously they used to go for anything in their way with horns and hooves.”

St John’s Well, the very one said to have been made by his staff is the focus of the ceremony held on this evening. In the nineteenth century the spring was enclosed in its current stonework and surrounded by a circle of railings. During the afternoon St John’s Well is dressed. However, this is not one of those Derbyshire well dressings made of clay and petals, it is sometime for simpler but just as impressive and pleasing to the eye. Around the base of this well are placed primroses and on top of the railings

Blooming Hawthorn crowns the top of the railings, beneath the hawthorn, are three wreaths of mixed seasonal foliage and flowers mainly rosemary, gorse and forget-me-not on each side with another just above the small opening. In other years ivy and adorned with a cross and garlands of tulips and daffodils had been used but the year I went the simple adornment was most effective in the evening sunshine. Similarly in previous years had meant only a slight representation of primroses making the well dressing a little lacking in impact. The year I went it was a glorious attempt. Primroses were still a little short in number in May and so much of the yellow was provided by mimulus. 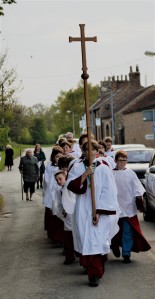 Inside the church people were gathering excitedly. Dark clouds had threatened all day but as soon as the choir appeared from the church the sun started to shine. This choir which come from Beverley Minster, consisted of 27 men and boys of all ages enthusiastically were gathered beneath the church tower. They were running hither and thither; it looked like getting them to be in an orderly row would be difficult – but the choir master called out and they arranged themselves ready to go. The crucifer appeared and clutching their hymnals they were off through the churchyard down the lane to the church and then across the main road. Unlike similar processions there were no police in their bright jackets obscuring the spectacle. No cars appeared in the time they processed, it is an obscure village after all or was it the miracle of John taming the bullish motorcar. Behind the choir were the rest of the congregation which was added to as the procession went as curious onlookers, photographers and locals who had not managed to get to the church joined in. 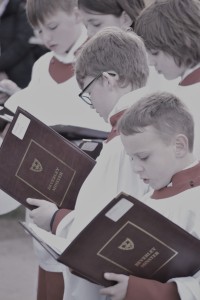 In such a small village such a procession was quite a spectacle: with its crucifer holding their cross up high and proud, snaking down the lanes to the well, with the white tunics of the choir shining in the evening sunshine.

Soon the choir reached St. John’s Well and they arranged themselves on the bank opposite and opened their hymnals ready to sing. The rest of the congregation arrived at the well and a silence descended as they prepared. Previous years one of the congregation, a young boy or girl, stooped down and placed a small pot of primroses at the base of the well to add to the others. As the well was fully decorated perhaps this was missed. Once the congregation was in position, appropriately the vicar started with John 7:

“Jesus stood and said in a loud voice, “Let anyone who is thirsty come to me and drink. Whoever believes in me, as Scripture has said, rivers of living water will flow from within them.” By this he meant the Spirit, whom those who believed in him were later to receive. Up to that time the Spirit had not been given, since Jesus had not yet been glorified.”

The followed the Collect for St John of Beverley

“In days of old in country ways, In Yorkshire woods, John sang they praise. Each year on the springtime wold, he saw the primroses unfold, the bleating lambs, the breaking sea. God gift to man eternally.

Mist-laden nights, the shepherd’s crook, he left for cloister and for book, Through psalm and vigil, fast and prayer he grew in soul and found the three. But as he served in land of Kent. His winging thoughts still northernly.”

It was a short but evocative ceremony remembering this local Anglo-Saxon saint and the gift he gave to the village…once they had done their service they turned around and processed back to the church were a sung eucharist uplifted the spirits more. A delightful event which is nearing is 100 years and long may it be celebrated. 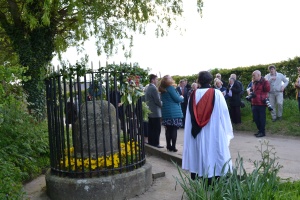