“Thanksgiving would never work in Britain, because it is the day that self-deprecation forgot. Is it a holiday commemorating the Anglo-Saxon invasion of a country that already belonged to someone else? Yes. And what must have been an incredibly awkward dinner party between invader and invadee? Right again.”

Speaks a correspondent to Telegraph

Thanksgiving is a quintessential stateside custom, that it may surprise you to read that it is celebrated in the UK. It is not that surprising considering there are near 200,000 ex-pat statesiders in the country not to add those tourists who may be here for a holiday.

The folklore tells that in 1620 the harvest failed at the Plymouth Foundation and half of the Pilgrim fathers died. Understandably when in 1621 there was a better harvest and so understandably they wanted to celebrate a particularly good harvest with their local first nation groups the Wampanoag. Indeed, it had not been for them they would not have survived, for they taught them how to grow corn, beans and squash – future staples of Thanksgiving. You’ll notice no turkey reports suggest the three-day feast included lobster, cod, deer and goose!

Fast forward to the first President George Washington, who in 1789 proclaimed the inaugural national Thanksgiving Day. Yet despite it becoming an annual holiday in 1863 when it was set as the last Thursday in November, it too Franklin D. Roosevelt in 1939 to finalise the holiday setting it as the fourth Thursday in the month.

Thankful in the UK

It is unclear when Thanksgiving was first being celebrated in the UK, but I would imagine those World War II servicemen would have been privately having a toast in the dark days of the war. Indeed an account Similarly, from a young boy who happened to be visiting a base in the 1940s remarked:

“I was invited into the dining room, and was amazed at the food that was there. It was Thanksgiving, and I thought Christmas had come early. I’d never seen so much food, as we were all living on rations. I was even lucky enough to taste some.”

And there is a comical photograph in Norfolk  which account how after being given permission by the farmer servicemen attempted to capture a turkey for their dinner – it was not clear whether they granted any of them a pardon! Similarly, the American students studying in the UK and their societies would have promoted the event and indeed it is one of the first places to look for it today.

However, ever eyeful on the commercial opportunity the main place you can find Thanksgiving in the many restaurants, often USA themed, dotted across the country and particularly in London which court American tourists. There can be found imaginative takes on the turkey, corn, pumpkin pie and other staples. Some are more than happy to spread it out to three days meaning they get lucrative weekend trade. 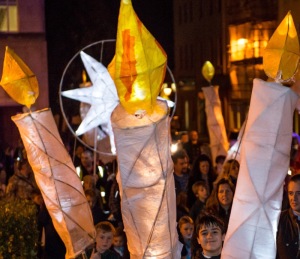 Unsurprisingly one place where something more substantial is done is Plymouth. With its connection with the first pioneers, those Pilgrim fathers, Plymouth has commemorated their Mayflower and Transatlantic heritage for a number of years and in recent years it has been celebrated with some enthusiasm. The custom consists of the reading of speeches by the Lord Mayor and other figures on the Mayflower steps where those Pilgrim fathers sailed from followed by a poetry, choir. An illuminated carrying lanterns group representing the Wampanoag process from there to the Guildhall to tell the tale of Moshup the giant, a supernatural figure of the tribe. It’s the closest the UK has got yet to New York’s Macey’s parade.

The other significant event is understandably a thanksgiving to God and this is where the US Ambassador speaks at a special service at St. Paul’s Cathedral, where America the Beautiful is also sung. The audience being again made up of ex-pats. However, the main stay of the celebration is the feast and now from Aberdeen to Wales, restaurants and University clubs will be serving up their feasts and providing kinship a necessary thing for those so far away.

Will it ever establish itself here in the mainstream? It seems unlikely, we already have our Harvest festivals, although the semi-secular nature and not to say the facts it’s a holiday may be an attraction. Thanksgiving is far too personal and unique to the UK and like Guy Fawkes Night, which has largely died out as the British diaspora lost their Britishness, it would be rather soulless. Sadly, perhaps many reading this would rather have this opportunity for a brief respite before the Christmas rush, a moment for family, friends, good food and company. Instead, the commercial side of the custom, Black Friday, has since 2012 been slowly establishing itself here, albeit devoid of its actual reason and purely a money-making venture. I personally think I’d rather have Thanksgiving given a choice than this buying bun fight! So to those who sit down to their turkey, pork and cornbread or sup on three sisters soup, finishing off with their Pecan pie this year – have a good one, you may be more thankful you are overseas than ever for this Thanksgiving!?