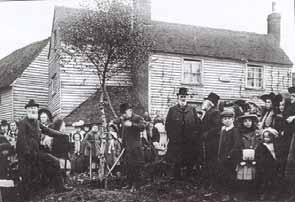 A common claim made by people is that British culture is being taken over by US ones – however, not all US customs that have come over have survived – Arbour Day – is one of those. Its establishment in the Victorian period was sporadic across the country and it appears the only place it set down roots – so to speak – was the picturesque village of Eynsford, England.

Arbour Day was established as an annual custom to encourage the planting of trees and it appears the town of Eynsford took it on in a unique fashion. This was promoted by Mr. E. D. Till who was keen to plant trees not only as commemorations but acrostically, meaning spelling out words or sentences.

The custom began in 1897, as a celebration of Queen Victoria’s diamond jubilee. This involved not only planting an orchard of apple trees but a series of different species, spelling out a motto, utlising poetry, Robert Brownings ‘Rabbi Ben Ezra’ stating:

“The best is yet to be: The last of life for which the first was made.”

The trees that were known being:

This being a row of fifty-two trees set along the main street from the railway to the village centre. Furthermore, the successful defence of Kimberly, Ladysmith, and Mafeking, battles of the South African Wars, were similarly commemorated. 1n 1902, four years after the Queen’s death, in a nearby meadow ambitiously were planted a line of thirty trees of no less than twenty-two species. The initial letter of each tree spelt out a line from Tennyson’s ode to the Queen:

“She wrought her people lasting good.”

Over a quarter of mile of trees were planted. Around the War memorial four trees read:

What has happened to the trees?

Of his tribute to Victoria’s 1902 memorial only the Sycamore survived the rest being felled to provide playing fields for the Anthony Roper Country Primary School. However, of the trees of her Jubilee memorial, a number survive. These being:

But they don’t make any sense now!!

Despite Eynsford’s enthusiasm and the support of the fledgling R.S.B.P who tried to name it Bird and Arbour Day, Arbour Day didn’t really catch on. Awbridge, in Hampshire, a festival was organised in 1902 in Awbridge Hampshire and Touchen End, Berkshire although neither were in April. E. D. Till, won a prize from R.S.P.B. for an essay on the best means of establishing Bird and Arbor Day in England the custom died out. Whether it was the lack of room in Eynsford or the death of its founder – Arbour Day never caught on or returned from US soils. Today a National Tree Day is established in December but this has failed to capture the uniqueness of Till’s acrostic cleverness.