“EDWARD VI, by the grace of God King of England, France, and Ireland, defender of the faith and of the Church of England and also of Ireland in earth the supreme head, to all our most loving, faithful, and obedient subjects, and to every of them, greeting.

Where it hath pleased Almighty God, on Friday last past in the morning to call unto his infinite mercy the most excellent high and mighty prince, King Henry VIII of most noble and famous memory, our most dear and entirely beloved father, whose soul God pardon; forasmuch as we, being his only son and undoubted heir, be now invested and established in the crown imperial of this realm, and other his realms, dominions, and countries, with all regalities, pre-eminences, styles, names, titles, and dignities to the same belonging or in any wise appertaining:

We do by these presents signify unto all our said most loving, faithful, and obedient subjects that like as we for our part shall, by God’s grace, show ourself a most gracious and benign sovereign lord to all our good subjects in all their just and lawful suits and causes, so we mistrust not but they and every of them will again, for their parts, at all times and in all cases, show themselves unto us, their natural liege lord, most faithful, loving, and obedient subjects, according to their bounden duties and allegiances, whereby they shall please God and do the thing that shall tend to their own preservations and sureties; willing and commanding all men of all estates, degrees, and conditions to see our peace kept and to be obedient to our laws, as they tender our favor and will answer for the contrary at their extreme peril.”

Thus reads the oldest surviving Proclamation of the King that of Edward IV and whilst early Proclamations were made by the monarch over time a accession council set the date and made the announcements. However, nowadays news spreads very quickly. Within seconds of an official or even unofficial announcement the world knows so when Charles ascended to the British Throne one might expect a Twitter tweet or a Facebook feed to do the job but of course this might well have happened on top of a more of the most traditional custom of the proclamation. Indeed at the Proclamation I attended the Lord Mayor stated:

“In an age where modern methods of communication convey news around the globe in an instant, the proclamation is no longer the means by which people learn for the first time that they have a new Monarch. Today, however, is one of the first occasions when communities have an opportunity to come together and reflect on the moment in our nation’s history when the reign of our longest-serving Monarch came to an end and our new Sovereign succeeded.”

What is interesting is that the proclamation works as a cascade mechanism. The first official or principal public proclamation being that at St James’s Palace. This being read by the Garter King of Arms from the balcony overlooking Friary court. This then is repeated by the City of London at the Royal Exchange. This then progressed to the separate countries of Scotland, Wales and Northern Ireland and then it dissolved to the counties, then the cities and then the boroughs…I was half expecting at some point a person dressed in ceremonial robes shouting the proclamation through my letterbox at one point!

The High Sheriff of Nottinghamshire, Paul Southby gave the proclamation on the banks of the Trent at 1pm however I failed to attend this feeling the Nottingham city proclamation sat outside the impressive town hall. Thus, I attended the City of Nottingham’s proclamation.  By the time I had reached there a large number of people had attended, many previously laying the flowers in memory of Her Majesty the Queen. The flag was at half mast and a large number of dignitaries were arriving, many of whom had driven over from the earlier proclamation at the county offices. Despite there being a fair sized crowd I still managed to get right in front, they must have believed me to an official photographer. 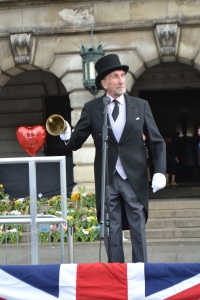 “Our sadness at this time is shared by people across the globe, as we remember with affection and gratitude the lifetime of service given by Queen Elizabeth II, our longest-reigning Monarch.”

She continued to explain that:

“The basis on which our monarchy is built has ensured that through the centuries the Crown has passed in an unbroken line of succession. Today’s ceremony marks the formal Proclamation to the people of Nottingham of the beginning of our new King’s reign. The proclamation of the new Sovereign is a very old tradition which can be traced back over many centuries.   The ceremony does not create a new King. It is simply an announcement of the accession which took place immediately on the death of the reigning monarch.” 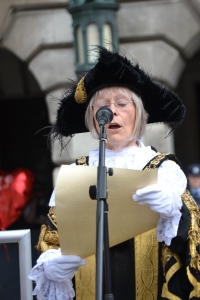 “Whereas it has pleased Almighty God to call to His Mercy our late Sovereign Lady Queen Elizabeth the Second of Blessed and Glorious Memory, by whose Decease the Crown of the United Kingdom of Great Britain and Northern Ireland is solely and rightfully come to The Prince Charles Philip Arthur George: We, therefore, the Lords Spiritual and Temporal of this Realm and Members of the House of Commons, together with other members of Her late Majesty’s Privy Council and representatives of the Realms and Territories, Aldermen and Citizens of London, and others, do now hereby with one voice and Consent of Tongue and Heart publish and proclaim that The Prince Charles Philip Arthur George is now, by the Death of our late Sovereign of Happy Memory, become our only lawful and rightful Liege Lord Charles the Third, by the Grace of God of the United Kingdom of Great Britain and Northern Ireland and of His other Realms and Territories, King, Head of the Commonwealth, Defender of the Faith, to whom we do acknowledge all Faith and Obedience with humble Affection; beseeching God by whom Kings and Queens do reign to bless His Majesty with long and happy Years to reign over us.

Given at St. James’s Palace this tenth day of September in the year of Our Lord two thousand.”

The flag being raised for the Proclamation temporarily but also a curious custom where the mace bearer turned the ceremonial mace over; a tradition undertaken in cities which had been visited by the monarch as a sign of respect.  There was a curious moment where the tape recording used to play the National Anthem did not appear to work. To be honest with a city as notable as Nottingham I would have thought that they might have managed some live music. Come what may though the Lord Mayor used their initiative and got the crowd to join in three rounds of ‘God Save the King’.  Then finally the tape worked, and the crowd sung ‘God save the King’ many I am sure for the first time. 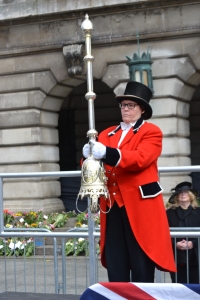 The Proclamation over I left the City to experience it all over again at Gedling Borough council. Here the Mayor and Mayoress were joined by the councillors, the current MP Tom Randall and the previous MP, now Baron, Vernon Coaker. The reading was of course exactly the same but less people were assembled and after the singing of God Save the King, for the second time that day…for me…the party processed down to a small monument in the grounds of the park which had become a temporary memorial for the Queen.  The custom of course is a rare one but naturally also a very historic one and who knows when we shall hear it again.