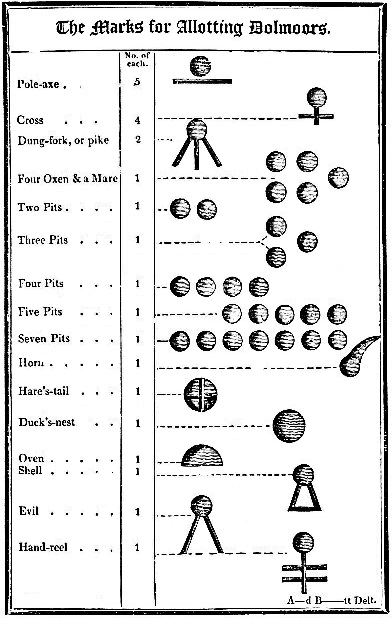 A curious lost custom is recorded by Thomas Collinson, in his 1791 History of the County of Somerset where he describes a unique custom that was celebrated on the Saturday before old Midsummer Day in the parishes of Congresbury and Puxton. T. F. Thistelton-Dwyer (1878) British Popular customs records that:

“At two large pieces of common land, called East and West Dolemoors. These, he says, were divided into single acres, each bearing a peculiar and different mark cut on the turf, such as a horn, four oxen and a mare, two oxen and a mare, pole-axe, cross, dung-fork, oven, duck’s nest, hand reel, and hare’s tail.”

“On the Saturday before old Midsummer Day, several proprietors of estates in the parishes of Congresbury, Puxton, and Week St. Lawrence, or their tenants, assembled on the commons. A number of apples were previously prepared, marked in the same manner with the before-mentioned acres, which were distributed by a young lad to each of the commoners from a bag or hat. At the close of the distribution, each person repaired to his allotment as his apple directed him, and took possession for the ensuing year. An adjournment then took place to the house of the overseer of Dolemoors (an officer annually elected from the tenants), where four acres, reserved for the purpose of paying expenses, were let by inch of candle, and the remainder of the day was spent in sociability and hearty mirth.”

The origins of this custom are unclear  but its association with marks in the turf shows as shown above indicates perhaps an affinity to customs such as the scouring of the white horse however no authors appear to have noticed this strange aspect of the custom either.

F.W. Weaver wrote iin volume 12 of Somerset and Dorset Notes and Queries (September 1910) that these carvings may be Saxon in origin. Quoting Frederick Seebohm’s English Village Community’s one of the Laws of Ine:

“If ceoris have common meadow or other land divided into strips (gedal land) to fence and some have fenced their strip (doel) and some have not,” Seebohm remarks that ‘There is here in the smallest possible compass the most complete evidence that in the seventh century the fields of Wessex were common open fields the arable being divided into acres and the meadows into doles, and as the system is incidentally mentioned as a thing existing as a matter of course, it is not likely to have been suddenly or recently introduced.  The evidence throws it back, therefore, at least to the earliest period of Saxon rule.’

This letting of the Somerset Dolemoors is mentioned in William Hone’s Every-day Book, Vol. 2 (1878) where the above image is taken. Sadly when the moors were enclosed the custom was discontinued in 1811.