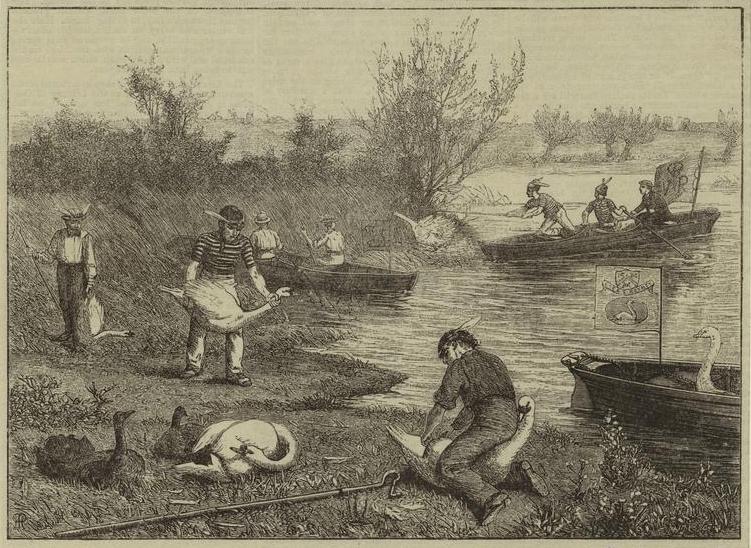 The delightful mute swan, gliding majestically down the river, its pure white plumage shining in the summer, has always been thought to be a Royal bird. The monarch owning all birds but in the past ownership was granted to certain groups and since the medieval times to two livery companies – The Vintners and Dyers. These two companies have what is called the royalty of swans. Margaret Brenthall in her 1975 Old Companies and ceremonies of Britain:

“The Thames swans have always been protected birds, and to kill one was a crime which once earned dire punishment. As late as the mid-nineteenth century transportation for seven years was the penalty, and in 1895 it was seven weeks’ hard labour.”

Cleverly because it would be impossible to catch all swans so all those which were marked belonged to the monarch. As T. F. Thistleton Dwyer British Popular customs present and past (1875) suggests:

“Formerly the members of the Corporation of London, in gaily-decorated barges, went up the Thames annually in August, for the purpose of nicking or marking, and counting their swans. They used to laud off Barnes Elms, and partake of a collation. This yearly progress was commonly but incorrectly called ” swan-hopping : ” the correct designation is shown by the ancient statutes to be ” swan-upping,” the swans being taken up and nicked, or marked. A ” swan with-two-nicks ” indicated, by his second nick, that he had been taken up twice.”

“in the sixteenth and seventeenth centuries the Swan Voyage as a purely practical affair. It was in the eighteenth century that a festive element was introduced. Guest accompanied the Liverymen in the Companies state barges, musicians were engaged to play during the voyage, guns were fired in celebration, and a vast amount of food and drink was disposed of. As the nineteenth century progressed the mood changed, for the state barges disappeared from the scene.”

Thus it appears Thistleton Dwyer is referring to this. However, as Brenthall notes:

“But a festive atmosphere still prevails today as accompaniment to the sheer work of rowing, catching the swans and cygnets, marking and pinioning; and on two days of the Swan Voyage the Court of each of the Livery companies; together with their guests; follow by launch in the wake of the swan uppers.”

“For this task the three respective Swan Herdsmen and their teams of Swann Uppers set out each July on a week-long Swan Voyage from Temple Stairs to Henley…the Swan Herdsmen at the time of writing are: John Turk, Queen’s Swan Keeper; Michael Turk, the Vintners’ Swan Marker and Bargemaster and Harold Cobb, the Dyers Bargemaster.”

The author states there were strong hereditary links within the ancient river appointments and I believe a Turk was my contact when I decided to find out more.

With a start at Temple the barges move down to Henley, regular stopping points are provided by the livery companies involved but I thought to be honest I was more than likely to see them gliding by and that was it – although at one of the locks I had the opportunity to see them do the loyal toast. Unfortunately, I missed the loyal toast and after deciding to picnic by the river could see in the far distance the swan uppers thinking this would be my opportunity to at least photograph this colourful watery procession as they gently skiffed the river in their three barges adorned with the banners of the Queen, Vintners and Dyers in a dazzling array of red and white.

Then their colourful red coats loomed closer in to view and a shout went out – they had seen some swans. Then with their boats they created a block to prevent the swans from escaping and the Vintner’s bargemaster leant over and grabbed the swan. It was then hoisted on to the bank and another presumably swan marker reached to get their marker and the swan was weighed, checked over and marked accordingly. Nowadays much of the process is to check on the health of the swans and since 1998 no nicking is done to the beaks rings being placed on the legs instead – which means that they cannot now be easily identified. It is a simple but colourful affair. I was amazed to be present at such close hand to see the process close up. I haven’t been back since but I was interested that for the first time in centuries Queen Elizabeth II the ‘Seigneur of the Swans’ attended the Swan Upping ceremony for the first time. It’s a simple custom only being partially cancelled due to high river flows in 2012 and 2020 due to Covid-19 social distancing measures – although one could argue being in the middle of the Thames they would be pretty socially distanced!