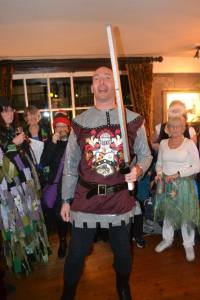 The Twelfth Night at Guildford founded by Pilgrim Morris founded in 1972. The groups dressed as characters from a plough or Mummer’s Play tour a number of Guildford’s pubs injecting a necessary shot of jollity into a drab winter’s night. As they tour around a fair number of followers are attracted to their infectious fun. Their costumes in themselves were a riot of craziness and eccentricity covered with ribbons and adorned with Chrimbo iconography one even included a miniature Father Christmas!

I arrived at the first pub having travelled across the capital from the Jeffrey’s museum’s Twelfth night and came across them mid mummer’s play as St George was being speared by a Saracen in such a rather cramped location that I feared as he feel he would hit his head on a table. 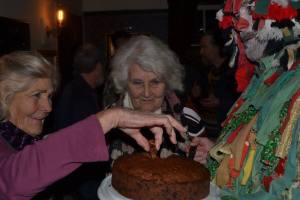 At the play’s conclusion seeing the revival of St George to cheers one of the Morris mean appeared with a cake and urged people to eat. Some were rather reluctant whereas others upon finding the purpose dived in and took a piece hoping to find the pea and bean. The pea and bean, hidden in the cake, being a Twelfth Night tradition, whosever would find it would be King or Queen of Misrule. The taker was unsuccessful. However, soon a partaker looking like they’d swallowed something a bit odd, reached into his mouth and extracted a hard bean – a cheer went out and he was celebrated as the King for the night.

There was then a sword dance again in the rather small area and it was perhaps thankful the swords were not the sharp kind.  One of the Morris then moved a chair and upon standing on it began to chalking the beam as traditional for epiphany. Their version slightly different:

“Finally, at each place, three crosses are chalked onto the beams to protect the house and bring good luck for the next year.”

There were more cheers.

Off we went to another pub and hear the wassail bowl was out. This a wooden bowl filled with spiced ale and was being offered around and drunk enthusiastically like a communion wine and in a way this was the intentions.

“In each of the five places that we visited, the Guildford Mummer’s play was performed followed carols and wassail songs – not the boring standard issue ones but traditional versions, some of which are local to Surrey.”

These songs were particularly uplifting at their final pub The Royal Oak where gathered around the stairway and up on the balcony the Morris dancers and accompanied impromptu choir sung their hearts out in their mixture of traditional and not so familiar carols. The custom is so well established now that it has its own followers who regularly attend and know the words of the more obscure and localised carols much as they do around Sheffield.  As noted by Phil again:

“There are always plenty of singers who come along to bolster the unofficial choir and, as happens each year“

One of the celebrants, morris man Phil Gorton of Farncombe said: “The pubs were packed and it was a riotous night!””

If you are in Guildford or perhaps not and are free on Twelfth Night join the wassail at Guildford for a great experience – second to none as it has something customwise for everyone – including free food and drink!!