A few years ago I planned to experience customs over the Beltane and May day weekend and it coincided with me providing a contribution at a Ritual Litter conference on the phenomena of rag wells or as they become more widely known clootie or cloutie well. As part of this I decided to do some field research and those decided to sit for six hours at the most famous clootie well of all – the titular Clootie Well or St. Boniface’s Well on the Black Isle not far from Inverness. This was one of three clootie wells in the Inverness area of which little is actually recorded of St Boniface with St Mary’s well on the other side of Culloden battle field being equally famed. A report in the Aberdeen Press and Journal, 3/5/37 noted of the Culloden Wishing Well:

“Despite the protests made by prominent figures in the Free and Free Presbyterian Churches against the annual pilgrimage to the Wishing Well at Culloden Moor, the numbers taking part in yesterday’s trek were greater than ever. The brilliant weather was no doubt largely responsible for the record crowd which took part in the centuries-old custom of dropping coins in the well, drinking the water, wishing a wish, and tying a rag to one of the nearby trees. The pilgrimage started at an early hour. Shortly after sunrise the first of the visitors set out on foot to the well. As midday approached the numbers grew, and by early afternoon the crowd reached unprecedented proportions. The trek continued until sunset, when the trees round the well hung heavy with ” clouties,” and a big heap of silver and copper coins lay at the bottom of the well, to be collected later and handed over to local charities. The crowd was drawn principally from Inverness and Nairn and the intervening districts, although some of the pilgrims came from as far north as Dingwall and as far east as Elgin. Hundreds came by car, motor cycle, push bicycles, and even on foot, and bus companies which provided special services from Inverness and Nairn reported that they never had a bigger demand for transport to the well. A conservative estimate is that 12,oo000 people took part in the pilgrimage. The money found at the bottom of the well amounted in value to £27 7/.”

In The Times 25th May 1957 the following account The Clootie Well A Highland Tradition from long before Culloden:

“The ritual of those distant days has survived the centuries : first a coin must be thrown into the well, a tribute to the spirit dwelling there; then taken of the water, a charm against evil; and then, after the wish, a ” clootie “, or small rag, must be tied to the branch of an over-hanging tree. This is considered so important that this wishing-well of Culloden is now known far and wide as the Clootie Well. Sure enough, as the path dipped down into a glade of trees with the en- circling stone of the well in their midst, we saw clooties all around, far too many for one tree alone, they were tied indiscriminately to the branches of fir, and spruce, and beech. Rags there were of all colours, blue and pink and white. Some of the fresh ones were tied in trim little bows, others, that had withstood the winds of winter, hung limp and discoloured. So they must hang until another winter has rotted them away; to remove them would bring bad luck, if not a transfer of the very afflictions of which the first owners had been trying to rid themselves.”

So there was certainly a fair bit of evidence of organised visits to the clootie wells but although these themselves had subsiding I was under the impression that people still visited the wells. 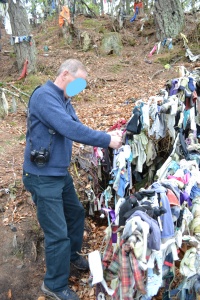 Despite the fact that any internet search will produce thousands of images of this well festooned in all manner of objects I did wonder whether as stated Beltaine (the 30th of April – although seen as a moveable feast including what we would consider the first day of May) was a favoured time. I decided to ask around before I went and upon contacting the local parish council was told by the replier that they had lived there for many years and never seen anyone tie anything there nor anyone at it…not a promising start.

Getting on my rag

However, I decided to make my way from Inverness and find out who would turn up if anyone! So making my way to the well. It was not difficult to find it. Within a few yards of the trees start to appear adorned with ribbons and rags and the closer and closer the more and the more these trees buckled and bowed under the weight of these offerings. Some see as it as enlightening, others an eye sore; it was certainly eye opening! In 1979 the Morrises in their Scottish Healing Wells bemoaned the use of modern fibres stating:

“There were many rags in evidence during the visit since the majority were of unrottable man-made fibre it was obvious that the visitors did not fully understand the purpose of this part of the ritual.”

The sign at the clootie well does much to keep the tradition alive as well as advice against such unnatural fibres – to little avail I feel. However, locals supported by the Woven network have worked to trim the amount a few years back.

I made my way to the epicentre where the rags became more dense. Indeed where the spring arose was like a broken washing machine full of dirty and wet rags. Local folklore tells that the best place is to be nearer the spring and as such the roots surrounding the chamber were indiscernible. I sat nearby awaiting visitors, The first hour I saw no-one and as the second hour began to slide away I decided to tour around recording the offerings around me. There were huge numbers and a huge range. There were shoes, bags, hi-vis jackets, socks and underwear. From the later it was clear the value of buying Calvin Clein against own brands in terms of decay and lichen growth!

High above in the trees above the springhead there was even a collection of shirts all signed by the same members placed here year after year with the day and dates…at least I could be assured that there would be someone at the on that date the next year!

However, suddenly I could hear voices below me and slowly I made my way down to announce my presence. The first couple were locals who had visited with some relatives to show them the site and despite attesting they did not use it; the grandmother barked at a younger member ‘dont touch the clooties otherwise you’ll contract what they were put up there for.” I asked what she meant and she explained that people visited the wells to remove ailments and issues that they had using in some cases the water to wet the rag, rub on the afflicted area and then attach to to a tree. As it rotted the ailment would disappear.

They soon departed and were replaced by another smaller group; a local tour guide and an American keep to see the place. The tour guide said he regularly visited the well but the last time he left a deposit was when he left a Scottish football scarf when he emigrated. He said he wasnt keen to find it because he became divorced soon after and feared that his ex-wife would return! The tourist with him was keen to add to the clooties but could only add a sock but dutifully removed, soaked in the stream of the water and circled three times clockwise around the spring head as directed and attached to a tree.

Soon a steady stream of people attended. One couple were reluctant to be talked to but I watched as they solemnly took out a hanky dipped in the water, followed the same movement around the spring and tied it up above it slightly out of sight and moved off even more surreptitiously! I watched and saw around 10 people following the ritual some were local but the majority were tourists drawn by the site’s considerable internet presence and prevalence of neo-pagan interest. All in some form followed the same ritual although I noticed a couple completely ignored the well and attached their offering to the trees directly…which seemed slightly pointlessly! Most knew the importance of visiting the spring over the Beltane period and indeed one suggested a very plausible reason why drinking its water at this time would be better stating that as this was in line with the ice water melting on the mountains nearby and so the water would be fresher.

So it is clearly a living tradition and one which is still done over the Beltane period. However, by the very number of clooties here a custom more linked to the availability of visitors. Sadly, if they are following the tradition correctly using an artificial materials would mean that whatever ailments they had would remain…I am sure there is a message there about modern society.