The Southwell Ploughing match is one of the oldest agricultural traditions in the country. It was established in 1855 by the Southwell and District Agricultural society consisting of four ploughing classes with the first ploughing match being undertaken in 1856. This was at Averham Park. Unfortunately the group folded in 1880 but was re-established in 1908 by the Southwell Farmer’s Club. The First World War put an understandable stop to such activities only being restored in 1922. Modernisation begun when in 1937 tractor pulling was added in 1936 but it did not last long stopping in 1938. Post war in 1947 it was re-started. It has not had an unbroken run since unfortunately with foot and mouth in 2001 stopping it, heaving rain in 2017 and the Coronavirus pandemic.

The ploughing remains central to the event. One can see the beauty in creating a straight furrow although how it was exactly judged was a bit of an arcane art. Being a few yards away from it also made it a bit difficult to follow. From the distance I stood it looked like a rather strangely staggered relay match with tractors. There were massive seed drills, old and ancient some looking like they had just out of a museum for the day. The tractors were centre stage of course in their many forms old and new. The smell and the sounds of threshing machines and old engines are very evocative. However, the event is more than just watching the ploughing and there is a whole range of country and rural related events and trade stands. These range from dog shows to farmer’s market. I spent a lot of time looking at the cheese available and admiring the dog’s agility. 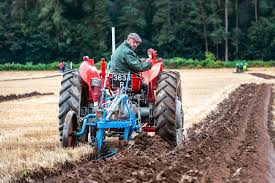 These events are very much the stage and advert for the agricultural community so needed. An essential place for all to attend especially those who by our increasingly urban communities have been disconnected from the countryside.

Its position in the calendar of the year shows how calendar customs can be in tune with nature like a descent of the lost harvest homes; the event links to the end of the harvest and the necessary preparations of the land for the crop next year. Thus despite this being a ‘showing off’ of the ploughing communities best talents it is also a subtle way to show best practice. It has become as it has grown a way to celebrate the agricultural way of life and to stress the importance of these traditions to keep our rural communities alive.