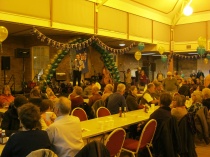 This is my first post for the new category; custom transcribed from foreign shores to England.

Picture the scene! The sun pouring down, people throng the beach, celebrating and tucking into their breakfast….that’s what might be going on at Port Lincoln, Australia…however a few thousand miles away….surprisingly in Lincoln, Australia Day is celebrated too! Its a long way from the beach and Skegness would be a bit too bracing at this time of year! Understandably, the celebration has moved to indoors.  This is perhaps a contrived custom transcribed from southern climes. Across the country, Aussies have celebrated this day, whether they are in bedsits in Earl’s court, Bush House or beyond, certainly since the 1950s.

Tie me banger oo down sport!

I spoke to my wife, who is Australian and said don’t forget your passport…I think she was thinking we were going somewhere exotic! Although when I said to her she wouldn’t need a suitcase that problem was ironed out I feel. On arrival signs, perhaps some of the weirdest I seen, pronounced: 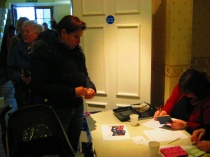 Lining up at the start, Australian nationals produce their passports for their free breakfast and the number duly written down. There appeared to be a number of natives in the room according to the numbers written down. However, you would not recognise them for upon entering one is assailed by this cliché fest…didgeridoos, cork hats, cuddly Kangaroos. The band plays a melody of Australian favourites Waltzing Matilda etc. Sadly, we had missed the start which begun with the chords of ‘Advance Australia fair’, the National Anthem. I wonder if the audience joined in? 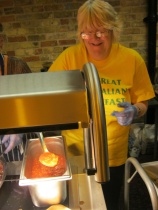 The Mayor spills the beans..well almost! 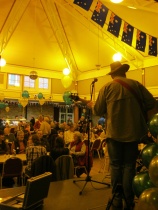 Sadly they couldn’t afford Rolf Harris….! The rest of the joke is yours!

Day to remember or Forget?

The establishment of a nationwide Australia Day did not really begin until 1934, although the day, remembering the arrival of the First Fleet at Sydney Cove in 1788, was first noted in 1808. Now a public holiday, it is not without controversy. The day is understandably called Invasion Day by the country’s indigenous population, often as a ‘Day of Mourning’ for the loss of their culture. Other indigenous people have more positively called it Survival Day..that they are still there! I’m not sure when the Lincoln locals tuck into their bacon and eggs surrounded by these cheery Australianisms that this aspect has even been thought about. It might shock them perhaps if they did.

Lincs across the sea!

The establishment of the Australia Day breakfast was in 1991. Maureen Sutton in her Lincolnshire calendar (1996) notes:

“In 1991 the Mayor of Lincoln for that year visited Port Lincoln…During his visit he was invited by the Australian Mayor to celebrate Australia Day…with the local tradition of a beach breakfast, served to the people by the Mayor. Those who attend in period costume qualify for a free breakfast. Lincoln’s Mayor was most impressed by every aspect of this tradition, so when he returned to the English Lincoln he decided to have his own Australian Breakfast.”

Throw another prawn on the barby

The meal, an English breakfast was served by cork hat wearing officials, one being the city’s mayor and local ‘celebrities’, although there aren’t many in Lincoln, on that matter the panto likes to help! Sadly there was not much for the Vegetarian…do they not exist in Lincoln or Australia? Speaking to a number of regulars they were dismayed that as there was not a live link up to Australia, although Sutton (1996) says there is in the form of a telephone call between the Mayors. I agreed, I think it would have made it more relevant and with today’s technology much easier and could be on a big screen via Skype or such like! Sutton (1996) also notes that upwards to 1600 people were served breakfast….this might explain why we were quickly ushered out….but a bit of shame considering it did not give us that long to soak in the atmosphere (so bring a fold up chair if you do!) but understandable as they want to get as many to raise as much as they do.

As we left the Australian Shop based in the picturesque town of Stamford is ready to snare a homesick aussie in need of a TimTam or Cherry Ripe. It’s a great little frivolous event and one that the citizens appear to have taken to heart. I would be nice to see Lincoln’s Australia Day breakfast becoming an event that all the diaspora of that country could come together recognise the day and get involved. Now that would raise some money…and empty much of London’s rental accommodation as well!!

Sadly, this could be a lost custom because as I was writing this it was clear that for various reasons, one lack of interest, the 2014 event was cancelled as the venue was apparently also not available. So even more reason to get involved you Aussies and make sure next years a bonza one! 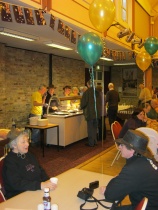 Another chance to wear those novelty gift hats you bought