Visit virtually any church whether Anglican, Methodist or Catholic and you are more likely to come across an Easter Garden or Tomb. Like the Christmas crib scenes it is slowly becoming an Easter stable. However, unlike the crib whose origin can be traced back to St Francis Assisi, the Easter garden is less clear with its origin.

A precursor of the Easter garden was the Easter Sepulchre. However, this is an English tradition. Indeed in a number of churches in England can be still seen the remains of these Easter Sepulchre, where the host was placed before Easter and revealed on Easter Sunday. Such practices at the Reformation were treated as Popish and many were destroyed and the custom forgotten.

However, across the mainland of Europe it is thought since the medieval times, the church would make a temporary garden inside the church on Maundy Thursday which would last through Easter week to around Pentecost.

How does your garden grow?

Trying to trace the first appearance of the custom in Britain is difficult no-one appears to have recorded when first it happened. However, a clue can be found in Cecil Hunt’s 1954 British Customs and ceremonies when, where and why book who states that:

“The Easter Tomb and Easter Garden are to be found in an increasing number of churches, though not yet claiming the wide acceptance of the Christmas crib.”

The ‘increasing number’ statement suggests it was a fairly newish custom and the author goes on to record a notable example, possibly the oldest in the county. He notes:

“At Harbledown, near Canterbury, Kent, on the Pilgrim’s Way, the parish church of St. Michael has since 1939 presented an Easter Garden that brings thousands of pilgrims from afar. It depicts in miniature, on platforms occupying a large part of the east end of the church, the whole story of the Passion and the Resurrection. It is a custom of singular beauty and reverence, conceived and executed with remarkable artistry, by Mrs. John Allen, wife of the Rector.” 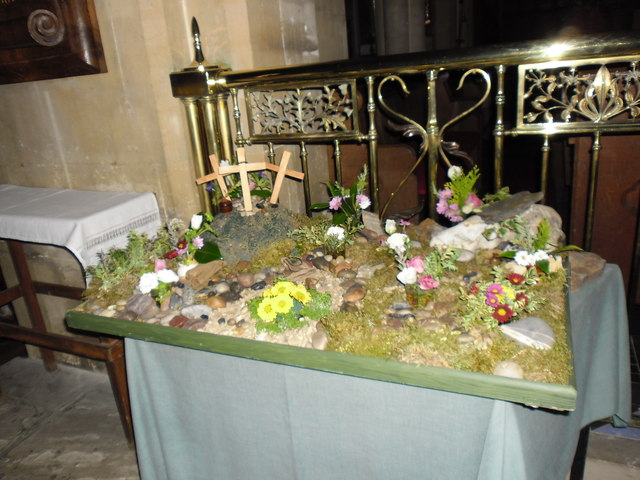 Sheila Macqueen, describe possibly the British Easter garden which influenced the other in her 1964  Flower Decoration in Churches: which set about the font in 1955 in west transect of St Paul’s Cathedral:

“The area around  was transformed into a little formal garden divided into sections, each one surrounded by a box hedge.”

“Against the background of tall cupressus, silver birch, and also rhododendron, forsythia, and other flowering shrubs, daffodils, hyacinths and polyanthuses were planted….The beds were planted with the little flowers which children like, such as daisies, forget-me-nots, and primroses.”

Now the main Easter Garden is a much smaller affair but perhaps its fame has spread. The Easter Garden unlike the Christmas crib has perhaps grasped the zeitgeist more. It is a lot easier to make. Indeed, a quick search online shows many churches and church schools have introduced competitions to make them. I had in fact come across a small group of children happily carrying their handiwork into a church on the way to Rivington Pike. Another search online reveals websites instructing how to make them. 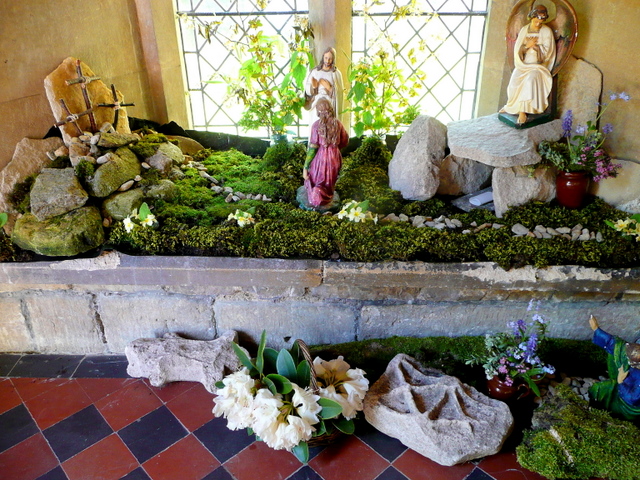 Oasis in the church

The Easter garden has three main components: a stone or stone structure to represent the empty tomb, a mound with three crosses and lots of flowers around it. However, this apparently limited features has not restricted the artistic flair of the creators. In some gardens the creator places the soldiers who look over the tomb, the last supper table and associated figures and Jesus They can consist of a small garden set in the base of a pot stand or cover part of a church. In Burwell church, Cambridgeshire, they had a happy and sad Easter gardens, a sort of before and after! Indeed some Easter Gardens are an opportunity for artistic excellence. In 2017 Worcester Cathedral had:

“As well as the traditional Easter Services, to which all are welcome, ‘Stations of the Cross: Via Dolorosa – Christ’s Sorrowful Way, an exhibition by Sara Hayward RCA is on display from 4 to 27 April 2017 in the Dean’s Chapel of the Cathedral. Worcester based artist Sara Hayward has created a dramatic exhibition this Easter time depicting Christ’s final hours before his death which is open daily from 9am to 4.30pm until 27 April. The exhibition of fifteen colourful oil paintings, and boxes containing contemporary artefacts to aid reflection for visitors, create a poignant sequence about Good Friday.”